Although mushrooms have been used medicinally for hundreds of years in Asia and other parts of the world, they are enjoying a resurgence in popularity as science continues to reveal the benefits.

One of the mushrooms touted for its extensive health benefits is the chaga mushroom (inonotus obliquus).

This mushroom is cancer and inflammation fighting, and even regulates blood sugar.

Here's the lowdown on this super-food. 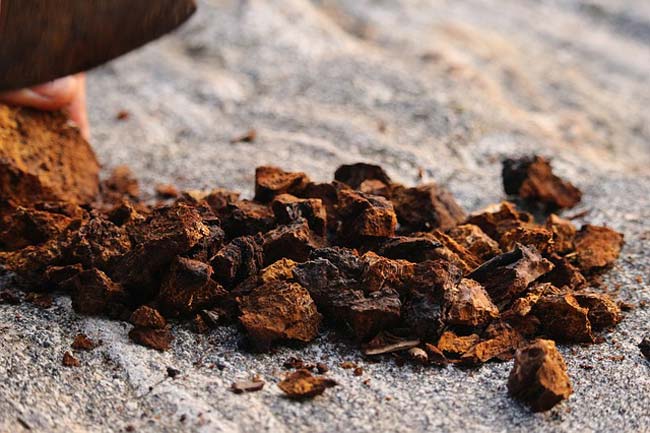 What Are Chaga Mushrooms?

Historically, chaga mushrooms have been used to improve immune function, decrease inflammation, and regulate both blood sugar and blood pressure – and research supports many of these historic claims.

The appearance of chaga is somewhat strange – almost like a clump of dirt. The inside of the mushroom reveals an orangey tissue.

Chaga mushrooms are usually dried and crumbled to make a powder for teas, extracts, and tinctures.

Drinking chaga as a tea is the most popular way to consume chaga because of its coffee-like taste. Boiling the chaga slowly for an hour or more ensures the nutrients seep out into the water.

Those who don't like the taste can take chaga in supplement form. However, the nutrients are best absorbed when dissolved in water.

Chaga mushrooms are an excellent source of many vitamins, minerals, and other nutrients.

Chaga mushrooms are full of antioxidants, with one of the highest antioxidant capacities of any food. This mushroom also contains a large amount of melanin.

Chaga mushrooms are thought to have powerful anti-cancer effects and research shows they have the potential to slow the growth of cancerous cells.

Compounds in chaga mushrooms have been found to exhibit anti-cancer activity in colon and lung cancer. One animal study found that mice with tumors experienced up to a 60% reduction in tumor size after receiving supplements of chaga mushroom for three weeks. (1, 2, 3).

Some of the antioxidants and other compounds are known to have an effect on cancer cells. Triterpene, an antioxidant, has been shown to kill cancer cells in at least one test tube study. Chaga is also rich in betulinic acid, which can be toxic to cancer cells.

In addition, chaga doesn’t seem to cause damage to healthy cells like conventional cancer treatments (4, 5, 6).

Because chaga mushrooms are so rich in antioxidants, they have powerful anti-inflammatory effects.

Chaga extract was found to help reduce inflammation in animals with ulcerative colitis. Another animal study showed that chaga helps to prevent the production of harmful cytokines that trigger inflammation (7, 8).

White blood cells are essential for fighting off harmful bacteria and viruses. This indicates that chaga mushroom could fight infections ranging from minor colds to serious illnesses (9).

Chaga mushroom may help in diabetes prevention and treatment due to its effect on blood sugar.

Mushrooms like chaga contain polysaccharides that have been shown to have anti-diabetic activity and help lower blood sugar levels.

Several animal studies have found that chaga consumption is linked to a reduction in blood sugar levels. Chaga extract helped to lower both blood sugar levels and insulin resistance in diabetic, obese mice. (10, 11, 12).

Although other animal studies have had similar findings, there haven’t been any notable studies in humans to see if chaga is effective at controlling blood sugar or is effective as a treatment for diabetes (13). 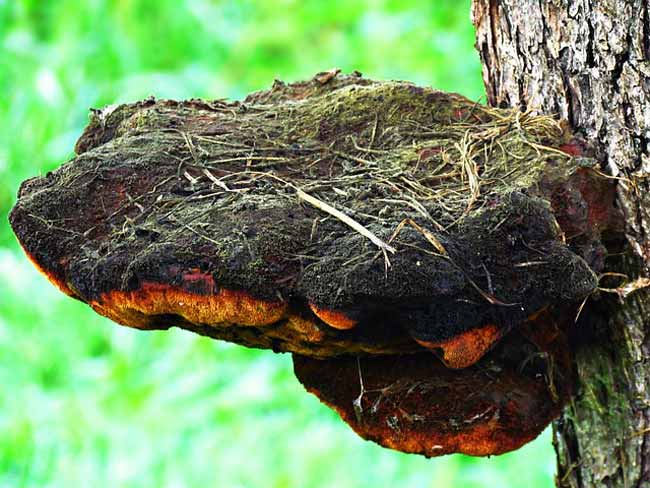 Chaga mushroom is parasitic in that it grows on trees.

There are several ways chaga mushrooms support heart health. One of the antioxidants in chaga, superoxide dismutase (SOD), helps counteract oxidative stress, which is known to cause high blood pressure.

By reducing blood pressure, the risk of heart attack, stroke, and other cardiovascular problems decreases (14).

Other antioxidants may help lower low-density lipoprotein (LDL), which is also linked to a decreased risk of heart disease, though studies would need to be conducted to determine how effective those in chaga mushrooms are at reducing blood pressure.

Betulinic acid, the same compound in chaga known for its cancer-fighting abilities, has also been found to be effective at lowering cholesterol. It may even be more effective than some drugs used to treat cholesterol and is thought to have low toxicity (15).

These studies were conducted in animals, and therefore more research needs to be carried out to see if chaga will have the same effect on cholesterol in humans (17).

Some of the signs of aging such as wrinkles are caused by oxidative stress in the body. Environmental exposure to pollution or excess sun also causes free radicals to build up in the body and age skin. Antioxidants help slow the process of aging.

The high level of antioxidants found in chaga may have anti-aging benefits but there are no studies to show how effective this is.

One study found that chaga mushroom can help improve memory and learning. Memory loss is related to aging and cognitive dysfunction may be improved with the consumption of chaga (18).

Chaga can be effective at protecting cells against viruses. One study found that chaga extract was able to protect cell cultures from being killed by the herpes simplex virus (HSV-1) infection.

Another study found that chaga extract helped to stop the herpes virus from entering cells and prevented membrane fusion, the process by which viruses enter a cell (19, 20).

One animal study found that the polysaccharides contained in chaga can help to decrease fatigue. In addition, the animals had an increase in stamina and were able to swim longer and recover faster due to a decrease in lactic acid (21).

Although chaga is not thought to be toxic, no studies have been conducted in humans to determine safe levels of consumption or supplementation. It is therefore not monitored by the FDA.

The safety of using chaga while pregnant or breastfeeding has not been assessed, so it is not recommended for women during these periods.

Chaga may negatively interact with some medications. For example, chaga might be a risk for people on insulin or those with diabetes due to its impact on blood sugar.

Chaga also contains a protein that can prevent blood clotting. So if you take blood-thinning medications, have a bleeding disorder or are preparing for surgery, consult with your doctor before taking chaga (22).

If you are buying chaga supplements make sure you purchase from a reputable vendor known for selling other popular supplements.

Chaga has been used medicinally for centuries and scientific studies contine to confirm its health benefits. Chaga mushrooms are very high in antioxidants – containing even more than acai berries – which comes with a multitude of health benefits.

Though note that the majority of studies have been conducted on animals or in cell cultures, so more research needs to be done to determine how chaga can benefit human health in the long term.

Note that chaga is not a substitute for standard medical care. Those who have conditions such as cancer, diabetes, or high blood pressure should continue with their usual treatment and speak with their doctor about the incorporation of chaga as a supplement.

Pregnant and breastfeeding women should avoid chaga, unless otherwise advised by their doctor.