Vegans avoid all forms of exploitation of, and cruelty to, animals for food, clothing or any other purpose. So of course, vegans do not eat eggs.

“But why not”? I hear you ask. “Eating an egg doesn't kill a chicken, and it's only going to waste, right”?

This is a common misconception, and the reason the consumption of eggs is still a hotly contested topic by meat eaters, and even some vegetarians.

WARNING: If you're sensitive to animal cruelty, I must warn you that this post contains video clips that will upset you. 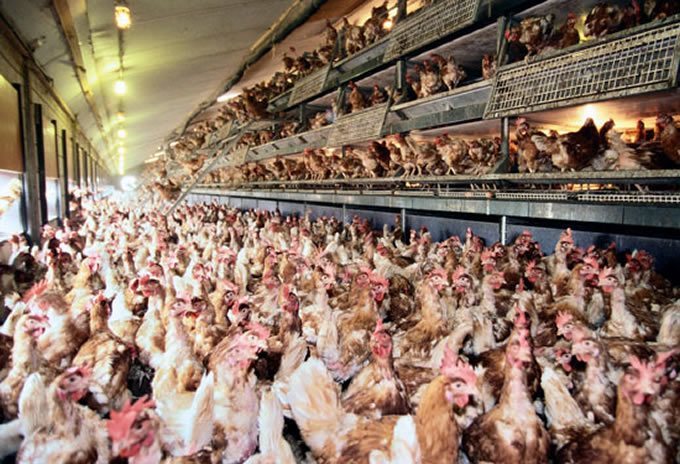 Doesn't look that “free”, does it?

A typical facility may house 300,000 birds at a time with 40,000 – 60,000 birds per shed. Contracted ‘growers' for the large companies therefore each grow several million birds annually. (Source: Animals Australia)

1. The Murdering of Male Chicks

Laying hen strains differ from meat production strains, and of course male birds of the laying strain do not lay eggs. So what does an egg farming business do with all these so-called useless birds?

Well, it would cost way too much money to keep them in a natural environment and let them live out their days as Mother Nature intended, so the male chicks are killed shortly after birth.

The most common killing method is ‘spine snapping', whereby pressure is applied to the neck to dislocate the spinal column from the skull or brain.

Another technique is asphyxiation by carbon dioxide and then maceration using a high-speed grinder – just picture a big blender with a huge blade slicing up baby chicks.

For businesses that want to save money, asphyxiation is by-passed and the chicks thrown into the blender alive.

In recent years electrocution has introduced. It's cheaper and more reliable than asphyxiation and neck breaking, but equally as cruel, I think you'll agree.

Animal welfare organisations don't seem to care much either. Here's a tweet from the good old RSPCA (UK):

We permit both the use of gas and maceration for the killing of day old chicks. Done correctly, both methods can offer an effective and humane kill and our welfare standards set strict parameters stating how both of these methods must be carried out to ensure this is the case.

2. The Death Sentence for a Non-Productive Hen

With pauses every few days, a hen can lay over 250 eggs per year. But as with human females, production slows down with age and, towards the end of her second year, production noticeably declines.

When she can no longer lay eggs she is considered useless and ready for slaughter.

From the time a hen is born a death sentence hangs over her head. She is marked with an invisible timer; one set by the cruel hand of a human, not by Mother Nature.

Once she can no longer serve her master with eggs, rather than being given back her deserved freedom in a natural environment, she is killed.

She is strapped in a vice and her head is severed or snapped.

It is worth noting that many birds don't make it that far. The strain of egg laying and despicable living conditions on both battery, cage and free range farms cause disease, irreparable injury and premature death.

3. The Deception of Free-Range

We have been led to believe that free-range hens have a jolly old time, running around pecking at grass and insects and laying the odd egg here and there so we can enjoy eggs for breakfast and a cake for dessert.

But the fate of a free-range hen is the same as that of a battery farm hen: once no longer required, she is slaughtered.

Only a tiny percentage of free-range chickens have “good lives” – and these are those lucky enough to be raised on home farms and allowed to live freely until they die of old age.

But even that has its morally questionable ramifications – as I explain in my backyard chickens post.

Briefly, when you consider that hens in a backyard environment can live for around 8-10 years, and in some cases a lot longer, and that they, like any other pet, rack up medical expenses when they are sick, you can see why it's unlikely that anyone would look after a hen into old age, let alone once she has stopped laying eggs.

That's why so many of them end up in rescue centres, or dumped.

The term “free range eggs” means eggs produced by birds that are allowed outdoors for at least part of the day. “Part” being the operative word here.

The amount of grass under foot, sunlight on feathers and wind through ears a bird actually experiences on a day-to-day basis depends on the country and its relevant laws.

In the majority of countries, even the US and UK, the legal requirements for “free range” are insulting.

When yard time is over it's back inside the indoor pen, where hens are squashed into unnatural conditions and forced to constantly fight for space move.

The only notable key difference is that free-range hens aren’t in cages.

Beware of other misleading labels too, such as ‘Cage-free', ‘Barn', ‘Barn-roaming' or ‘Aviary'. These are birds kept indoors that never see natural daylight.

Beware of the term ‘furnished cages', too. This is a rebranding of the term ‘battery-cage'; a small wire cage – about 67-76 square inches – where approximately 95 percent of laying hens spend their entire lives.

The Horrifying Reality of Eating Eggs

If you're eating eggs, it's time to wake up and smell the torture.

To maintain a profitable business, male chicks must be culled (gassed, thrown into a blender) and hens need to be slaughtered when they can no longer produce regular, quality eggs.

There is no ethical way to run an egg-farming business. It's not possible because it requires interfering with the bird's natural cycle of birth, reproduction and death.

Moreover, the more ethical you try to make the business, the more unprofitable it becomes. And losing money is not what people go into business for.

Before eating eggs, one must consider that animals feel parallel levels of stress and pain to that of humans, and chickens are no exception.

Excuses such as “Chickens are dumb animals”, “A chicken isn't as important as a human”, are just an arrogant deflection of the truth, a smokescreen to protect one's conscience.

Human babies aren't exactly “clever” when they're born, either. They live through instinct, naturally gravitating towards the security of their mother and relying on her milk for survival.

Baby chicks do the same, except they rely on mum to call them to food and show them how to eat instead of nursing for milk like a mammal would.

Can you imagine human babies being culled at birth, just because they were born the wrong sex, or earmarked for death once they are no longer able to fulfill a specific laying quota.