Let's face it; problems are bound to arise.

Successful relationships are based on shared values. Disagreement is, of course, healthy. But holding opinions that sit at the complete opposite end of the spectrum is going to make for a bumpy ride.

So a dedicated vegan dating site (or vegetarian), or at least one that enables you to filter by dietary preference is your best bet.

And in this post, I'll explore the best options available, and give you a good idea as to what your chances are of meeting a partner on each platform. 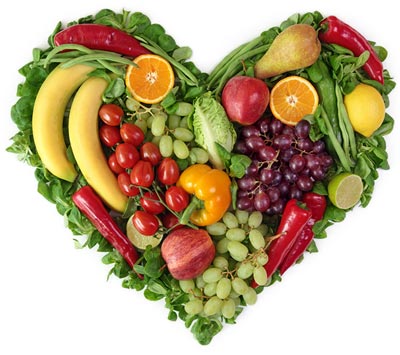 I know of two married couples where one partner went vegan, while the other remained a meat eater.

Of course, the partner who went vegan thought it wouldn't be a problem – it's just a bit of separate cooking. And besides, the other is bound to see the light and follow suit, right?

This wasn't the case and continues to cause problems. I mean…

Where kids are in the picture things can get really messy; because you both have a different opinion on what they should and shouldn't be eating.

But really, the reality is that single vegans should look to date vegan, or at least vegetarian – if, that is, they don't want to run into the aforementioned issues later down the line.

In my opinion, if you can't agree that cruelty to animals is unnecessary, and that meat is unnecessary in maintaining a healthy diet, it doesn't bode well for a successful and loving future together.

You need to start off on a similar pathway. Of course you remain independent people, but when you share so much of your life with someone, it makes sense that morally you are on the same page.

That's all well and good, you might say, but where can I find someone that thinks like me? A person looking for romance who shares my love of animals and plant-based foods?

Where can I find someone with interests like animal welfare, permaculture, sustainable living, alternative energy sources, bicycling over driving, organic gardening, and all such conscious things?

Originally launched online in 2000, this site has been serving spiritually-inspired singles ever since.

The site has over 85,000 members worldwide, and provides a progressive dating environment for conscious people such as vegans, vegetarians, and those who advocate for animal rights.

A typical member sees personal growth as a priority, and values holistic health and is interested in environmental issues.

The membership is fairly small in comparison with the commercial dating sites, but at least here you will immediately be surrounded by like-minded people.

Interestingly, the owner, Jill Crosby, started out dating on mainstream sites but found she didn't share much in common with those she was matched with. So she followed her heart and set up Spiritual Singles.

Here's a short video of Jill being interviewed.

Membership options range from $10/month to $19/month and include the following: 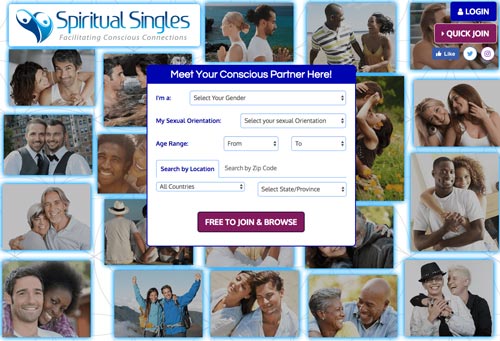 Match was previously top of this list, but I've had to drop it down because they have removed their dietary preference option, which is a real shame. I have emailed in about this and I hope they will reinstate it.

Most vegan and vegetarian dating sites don't have anywhere near the number of members of the bigger, more commercial sites.

However, usually the downside of nearly all of the big dating sites is that they don't let you filter by diet, except Match, that is (up until recently). 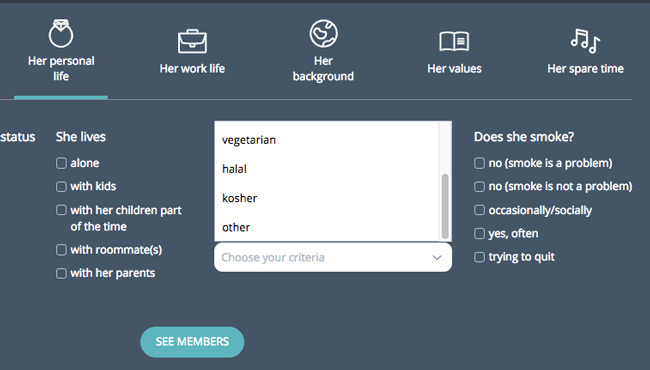 It is strange that they have removed this because they even ran an advert recently aimed at us vegans. Kudos.

With more than 13.5 million people visiting the site every month, Match.com has more vegan and vegetarian singles than any other site, by a long shot; you just have to find them 🙂

When  I reached out to Match competitor eHarmony regarding why they don't have a dietary search option for vegan or vegetarian, they said something to the tune of: “We don't consider it a relevant enough preference at this time” (I'm paraphrasing there, but that was pretty much the message I got).

Previously on Match, you could simply select ‘vegetarian' as a dietary requirement and search for matches. You'd see lots of vegans returned in the results.

You could also search by “healthy eating”, which, if you are mainly plant-based but occasionally flexible, might be more applicable.

Let's face it: dating is a numbers game. You are more likely to meet someone on a site with 13.5 million members than one with 100,000.

One other thing I like about Match is the amount of new members joining all the time.

You regularly see new faces and don't feel like you're swimming in the same pool with the same vegans and vegetarians who've been single for years!

And as we know, more people are embracing the veg every day, which means more vegans and vegetarians on commercial dating sites, and more filtering options to find them.

I'll update this again when and if they reinstate the dietary preference section. In the meantime, I think it is still worth joining because you can search by keywords and there are lots of vegans and vegetarians on there. 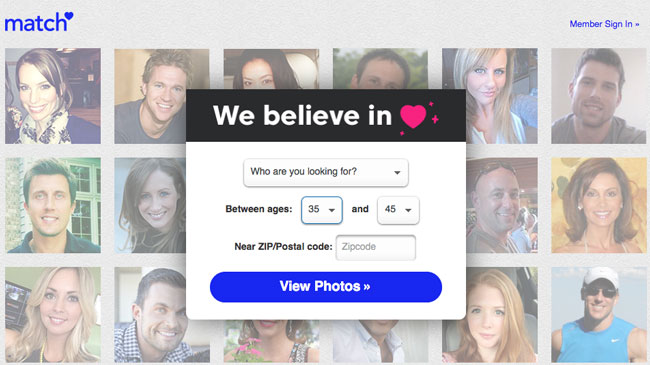 Obviously this comes with restrictions. You will need a membership to contact and IM (instant message) potential dates. It's pretty affordable though, and certainly cheaper than a night out.

Here's a comparison of the features you get with paid membership verses that of the free membership. 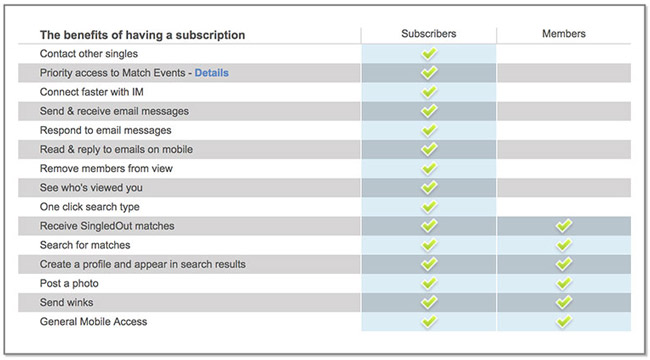 Veggie Connection is a not-for-profit site supported by volunteers and the financial subsidies of its founder, Ken.

It has a smaller user base than Spiritual Singles but is targeted more specifically to plant eaters.

The site is user friendly, albeit a tad out of touch with modern design expectations. As of 2020, there is an app too.

You can search by proximity, age, height, diet, religion, and more.

You can register an account for free and do the following:

It is worth nothing that a few years ago VC was voted Top site to find a Veggie Mate by VegNews magazine. 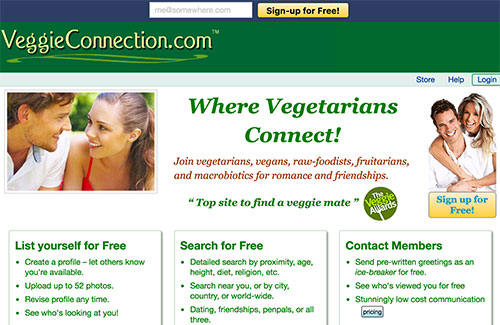 Veggie Date has been online since 1999. In addition to vegans and raw vegans, the site caters to lacto vegetarians, ovo vegetarians, semi-vegetarians and macrobiotic eaters.

It's worth a mention that Veggie Date was a 2013 nominee for best niche dating site, but looking at the site design it probably hasn't been updated since then.

The lack of maintenance lets it down somewhat because it affects the user experience and makes it pretty much impossible to use on mobile. Despite this, they claim that more than 400 new members join the site each month.

The site is free to join and browse around.

Premium members can upload additional photos and send any member – even free members – a message, who, in turn, will be able to read and respond. 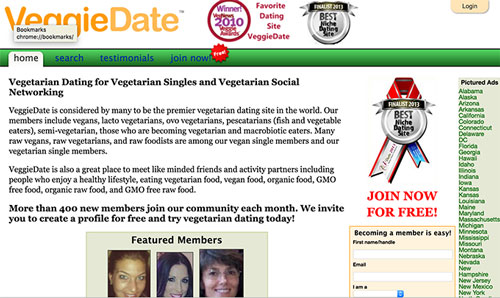 It wouldn't be responsible to write an article like this without including a section on safety.

You should be aware that dating sites do not conduct background checks on every person that registers.

This would be costly and take far too much time for members to be approved.

That said, some sites have much better safety protocols in place.

And this is one reason I am a fan of Match.com over the more niche dating sites. Companies like Match have investigators read and approve profiles before they are posted.

They are trained to look out for signs that a person's intentions may not be as they seem.

They look for things such as:

They have greater resources at their disposal to take complaints seriously.

So if you are harassed, threatened, or subject to inappropriate behavior, you can report it and be sure it will be taken seriously.

Smaller sites simply don't have the budget or staff to handle such complaints and liaise with police if necessary.

Like everything in life, there's a way to do online dating that generally results in greater success.

In fact, research shows that the secret to success in online dating is to aim high, keep it brief, and persevere.

Here's 4 simple tips for you to get started:

Finding a vegan date isn't easy. Even being a vegetarian makes you a minority in a world dominated by meat eaters. And if you're a raw-foodist or fruitarian, the dating pool gets even smaller.

Thankfully, the internet has made connecting with like-minded people much easier.

With forums, Facebook groups and dating sites, you can cast your net further than ever before. But as noted above, keep your wits about you and put your personal safety first.

That aside, online dating is responsible for hundreds of thousands if not millions of successful relationships.

There's a saying that “there is someone for everyone”, and that goes for vegan dating too.

When you consider that a night out for a meal and a few drinks will set you back at least $50, paying $20 a month or so for a dating site membership isn't much at all.

It's worth a shot. And you deserve it. I wish you the best of luck.