You are here: Home / Health / The Truth About Vegan Iron Deficiency & Why Non-Heme Iron is Best
Health

If you lack iron, you will lack energy.

If you are sleeping a lot, but still feeling weak and tired through the day, you probably need to up your iron intake.

Now, if you didn't know, iron comes in two forms: heme and non-heme.

Non-heme iron, on the other hand, is the only type you'll get from plant-based foods like fortified cereals, beans, spinach and lentils.

So which is better, heme or non-heme? Well, before we get into that, let's cover iron deficiency first; so that you fully understand why the body needs iron and how much you should be getting.

What Happens if I Don't Get Enough Iron?

Iron is an essential mineral. It has several important roles in the body, but perhaps most importantly it helps make red blood cells. These cells carry oxygen around the body. If you don't have enough red blood cells you can develop iron deficiency anemia.

What Are the Symptoms of Iron Deficiency Anemia?

How Much Iron Do I Need Per Day?

Note: Women who lose a lot of blood during their monthly period (heavy periods) are at higher risk of iron deficiency anemia and may need to take iron supplements. See your doctor if you fall into this category.

The way the body absorbs these two forms of iron is different. Around 15 to 35 percent of heme iron is absorbed into your system, compared to 2 to 20 percent of non-heme iron.

So if you're on a plant-based diet, you might suggest you should eat some extra iron-rich vegetables to increase the amount you absorb.

But as we'll discuss in a minute, if you eat a vegan diet that is rich in vegetables, nuts, seeds and legumes, you probably don't even need to concern yourself with this.

But hang on, there's one more thing to consider here:

The amount of iron absorbed into the body is also affected by other foods you consume at the same time.

For example, vitamin c strongly enhances the absorption of non-heme iron when consumed at the same time, because it forms a compound that's more easily absorbed.

So if you think you aren't getting enough iron, try to consume at least 25 milligrams of vitamin C in the same iron-based meal.

So perhaps eat oranges and prunes together, or add lemon or lime or any other citrus fruit to a meal with iron in it.

It really isn't that difficult to do, and  it's likely that you'll accidentally do this anyway  because so many food combinations contain vitamin c and iron.

So Are Vegans More Likely to Be Iron Deficient?

It is thought that those who eat plant-based diets may be more prone to iron deficiency, but it turns out they’re no more likely to suffer from iron deficiency anemia than anybody else.

This may be because not only that those eating meat-free diets tend to get more fiber, magnesium, vitamins A, C, and E but also get more iron. See this study.

However, this is non-heme iron, because those eating meat free diets don’t get much of the heme iron found in blood and muscle. But it turns out that this may be a good thing.

In fact, the avoidance of heme iron may be one of the key elements of plant-based protection against metabolic syndrome, and may also be beneficial in lowering heart disease risk.

The link between iron intake and coronary heart disease has been contentiously debated, but the inconsistency of the evidence may be because the majority of total dietary iron comes mostly from plants, and so total iron intake is associated with lower heart disease risk.

But if you just look at iron intake from meat, it’s associated with significantly higher risk for heart disease.

This is thought to be because iron can act as a pro-oxidant contributing to the development of atherosclerosis by oxidizing cholesterol with free radicals.

The risk has been quantified as a 27% increase in coronary heart disease risk for every one milligram of heme iron consumed daily. See this study here which concluded:

This meta-analysis suggests that heme iron intake was associated with an increased risk of CHD. 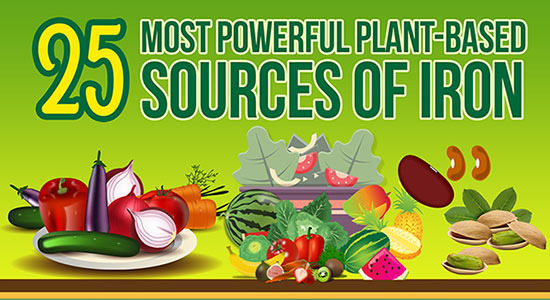 The same has been found for stroke risk.

The studies on iron intake and stroke had conflicting results, but maybe because they have never separated out heme from non-heme iron.

That was until this study, which found that the intake of meat iron, but not plant iron, was associated with increased risk of stroke as well as diabetes.

Higher animal iron intake is significantly associated with greater risk of type II diabetes- a 16% increase in risk for every daily milligram of heme iron consumed.

And the same for cancer, with up to 12% increased risk for every milligram of daily heme iron exposure. In fact you can actually tell how much meat someone is eating by looking at their tumors.

Though they just looked at lung cancer, they expect these meat related gene expression changes may occur in other cancers as well.

We do need to get enough iron, but only about 3% of premenopausal white women have iron deficiency anemia these days. However the rates are worse for African and Mexican-Americans.

But how much money can be made on beans, right?

So the meat industry came up with a blood-based crisp bread made out of raw iron, cattle and pig blood, one of the most concentrated sources of heme iron, containing about two-thirds more than chicken blood.

But the worry is not the color or taste, it’s the heme iron itself, which, because of its potential cancer risk, should not be considered safe to add to foods intended for the general population.

Wording referenced & paraphrased from the video below by Dr. Michael Greger. MD

Try not to get caught in the trap of taking iron supplements on a permanent basis, as you should be able to get more than enough from your diet.

It's actually quite easy to overdose on iron tablet, and the side effects of taking high doses over 20mg include constipation, nausea, vomiting and stomach pain.

Taking 17mg or less a day of iron supplements is unlikely to cause any harm.

However, some people do need to take an iron supplement due to anemia or poor absorption.

Women who lose a lot of blood during their monthly period are at higher risk of iron deficiency anaemia and may need to take an iron supplement too.

What Are the Best Sources of Non-Heme (Plant-Based) Iron?

Now you know why you need iron, how much you need and the difference between the different types of iron, you'll want to know which vegetables, fruits and nuts to eat to get your daily boost of iron. And there are some big hitters out there.

Nuts, beans, wholegrains and dark-green vegetables are all good sources of iron, and there's a ton more.

So do yourself a favor and click here to see my top 25 sources of plant-based iron.

Having this infographic to hand will give you quick and easy access when doing your weekly shop, and enable you to stack your trolley full of iron-rich foods.