Glyphosate is a herbicide and desiccant applied to crops before harvest. It is used to kill weeds and grasses that compete with the growing crop.

It was developed by Monsanto (recently acquired by Bayer) in 1970, and later put on the market under the brand name ‘Roundup'.

Approximately 6.1 billion kilograms of glyphosate have been used across the planet within the last decade.

This fact alone makes it hugely important that we understand the risks of using glyphosate and determine its effect on the environment and human health.

So, is glyphosate safe? Let's see what the science says. 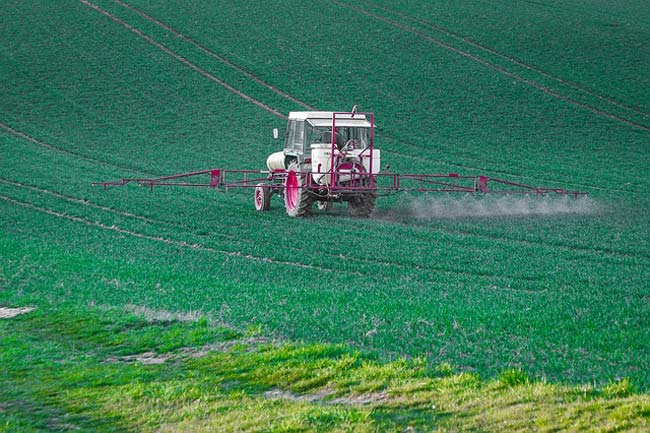 Glyphosate kills invasive plants by preventing them from making the proteins necessary for growth. But due to its toxicity,  it also has the potential to be harmful to other organisms.

Toxicology studies have highlighted a number of interesting effects on health.

Glyphosate has been linked to tumors in mice and rats. There is also what the IARC (International Agency for Research on Cancer) classifies as ‘mechanistic evidence’ to DNA damage to human cells from exposure to glyphosate (1).

Research also found that glyphosate causes damage to sperm membrane and DNA and causes reduction of mitochondrial functionality in Zebrafish. The research concluded that “glyphosate would reduce male fertility” (3).

In rats, research showed that glyphosate oral exposure caused neurotoxicity, and that brain regions were susceptible to changes in CNS monoamine (neurotransmitters such as 5-HT, norepinephrine, and dopamine) levels. Glyphosate altered the serotoninergic, dopaminergic and noradrenergic systems (4).

Even below regulatory levels, research published in the Food and Chemical Toxicology Journal states that the potential toxic effects of glyphosate include neurodevelopmental (impairment of the brain and central nervous system), reproductive, and transgenerational, and that these effects could be explained by endocrine disruption and oxidative stress (5, 6).

Although many studies have focused solely on the risks of glyphosate, which is the main ingredient in Roundup and similar herbicides, research has found that the inert ingredients used in such formulas enhance the toxicity of the product, and together the mixture becomes more toxic than glyphosate alone.

One study found that all diluted formulations of Roundup caused total cell death within 24 hours.

The Roundup adjuvants like POEA change human cell permeability and amplify toxicity induced already by glyphosate, through apoptosis and necrosis (9).

Research found that in addition to glyphosate, other chemical ingredients included in herbicide products included arsenic, lead, nickel, chromium, and cobalt, and that petroleum-based compounds in herbicides were “highly more toxic than glyphosate itself” (10).

Other research has shown that Roundup has endocrine and toxic effects on mammals, and that glyphosate-based herbicides disrupt hormonal function in humans (11, 12).

While glyphosate and other ingredients in herbicides can be detrimental to health, they also have an affect on bacteria. One study found that bacteria developed a faster antibiotic resistance when exposed to popular herbicides like Roundup (13). 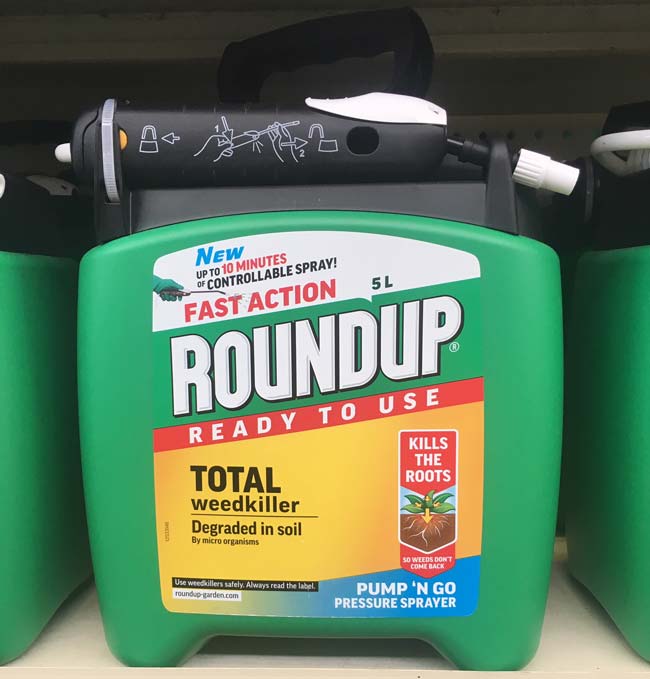 What Does the World Health Organization (WHO) Say?

IARC also concluded that there was “strong” evidence for genotoxicity, both for “pure” glyphosate and for glyphosate formulations. (14).

The categorization of glyphosate was agreed by JMPR, an international scientific group administered jointly by the Food and Agriculture Organization of the United Nations (FAO) and WHO.

The IARC Working Group identified statistically significant trends of higher numbers of cancers with higher doses of “pure” glyphosate in studies of mice, suggesting increasing response with dose. Cancers were seen in the absence of toxicity.

An important consideration in the IARC Working Group′s evaluation was that glyphosate caused unusual types of tumors, which are very rarely seen in untreated animals.

Rare tumors can provide important evidence of a cause-and-effect relationship, but may only be seen at high doses. The IARC Working Group′s evaluation of these tumors was in line with accepted principles and gave highly significant results.

Was the Safety of Glyphosate Covered up by Monsanto?

A paper published in the BMJ notes:

IARC’s assessment prompted a major controversy between health evaluation agencies, led to unprecedented lobbying by Monsanto (the primary manufacturer of glyphosate and genetically modified products resistant to glyphosate), and resulted in high profile court cases in the US.

Glyphosate typifies the problems associated with research, evaluation, and regulation of pesticides.

These include serious difficulties in the conduct of human research; important gaps in post-market research into exposure and risk assessment, particularly in low and middle income countries; lack of information on environmental effects; extensive industry involvement in evaluation and regulatory processes; and the major legal implications of these evaluations (15).

Controversy of a “cover up” was sparked when the European Food Safety Authority (EFSA) concluded that glyphosate was “unlikely to pose a carcinogenic hazard to humans.”

However, when lawmakers requested access to the studies which helped the EFSA come to this conclusion, they were denied.

The reason given was that the companies which provided the studies could have their commercial interests harmed.

Several EU lawmakers from Finland, Hungary, France, and Belgium filed a case against the EFSA to gain access to the studies.

In March 2019, a court ruled that the studies must be released. The court statements read:

In a landmark case in San Francisco, a man was awarded $289 million in damages when he claimed that using a glyphosate-based product caused him to be diagnosed with cancer (16).

Jurors found that Monsanto should have provided a label to warn of the dangers of using their product.

A Monsanto official promised to appeal the verdict and argued that there were hundreds of studies showing their product is safe.

Many types of foods have been tested positive for glyphosate contamination. Some products have been found to exceed the safe limit of 700 ppb set by the Environmental Protection Agency.

Some popular cereals, including varieties of Cheerios, contain glyphosate, as well as the following products:

Beer and wine have also been contaminated. Glyphosate was found in many popular brands of beer, including:

Several wine brands were also tested and all 10 samples were positive. All the wines were from the North Coast of California and included those from Napa, Sonoma, and Mendocino counties.

The Impact of Glyphosate on Soil & Ecosystems

Glyphosate is applied to plants and inadvertently gets into the soil.

Glyphosate binds tightly to soil. It can persist in soil for up to 6 months depending on the climate and the type of soil it is in. Glyphosate is broken down by bacteria in the soil.

In one study, half the glyphosate in dead leaves broke down in 8 or 9 days. Another study found that some glyphosate was taken up by carrots and lettuce after the soil was treated (17).

Research has shown that a Roundup formulation (R450) was toxic to the soil fungus Aspergillus nidulans, at doses far below the recommended agricultural application rate, and concluded that the herbicide might potentially impair agricultural soil ecosystems (18).

So the presence of glyphosate in the soil could change the balance of bacteria and fungi, in turn altering soil ecosystem functions and plant health (19).

One study suggests that ingestion of this herbicide could be a significant predisposing factor associated with the increase in C. botulinum mediated diseases in cattle (20).

Another study on carp fish found that those exposed to glyphosate-based herbicides experienced oxidative stress as well as lipid and protein damage in their gills. Additional negative effects caused significant damage to the gills of the fish and also induced an inflammatory response (21).

One study found that the earthworm Eisenia fetida avoids soil contaminated by the glyphosate based herbicide Groundclear (22).

Amphibians are especially vulnerable because they can absorb chemicals through the skin or by eating food sources that have been contaminated.

According to the Pesticide Properties Database, frog embryos that were exposed to diluted herbicides containing glyphosate had malformations of the face and cranium, shortened bodies, small heads, and defective eyes (23).

Common weeds can be important food sources for insect, bird and animal species in agricultural areas. Weeds provide food and nectar sources for insects, which in turn feed birds. Herbicides such as Roundup kill weeds, thus affecting the ecosystem.

Although weeds can be a problem in farming, there are many alternatives to using glyphosate-based products. One study in Denmark found that only 20% of weeds are harmful to a crop (24).

80% out of a total of 200 weed species growing in cultivated fields were too weak to compete with the crops and so affect crop yield (Andreasen et al., 1996). Only 20% of species affected the yield significantly; the other 80% of weeds also have a beneficial role by providing biological diversity and supporting ecosystem services

Instead of eliminating all weeds, it is important to find a balance to manage different types of weeds.

Integrated Weed Management (IWM) is a system that uses different techniques such as crop rotation and mechanical weeding. Other methods such as using cover crops or mixed crops in a single field can also be utilized.

Livestock can also be used to manage weeds, with sheep and pigs being particularly effective. If herbicides must be used, eobiotic substances are a better option than synthetically produced ones which can be harmful. Instead, eobiotic herbicides are biodegradable and don’t leave any residue behind (25).

Those with a casual garden or backyard who want to prevent weeds without using glyphosate-based products can weed by hand or shovel. Homemade mixes consisting of vinegar, dish soap, salts, and hot water can also be effective against weeds.

Although there is substantial evidence to suggest that glyphosate is not safe, the toxicity of Roundup, and indeed other products that use glyphosate, is increased by the surfactants and adjuvants and other compounds added to the mixture.

This makes the product wholly more toxic than the active ingredient alone (26).

One study tested Roundup and glyphosate independently on human placental cells and found that Roundup was twice as toxic compared to glyphosate (27).

This tells us that testing isolated glyphosate alone does not give us a complete picture of the impact of herbicides on human health. Indeed, the problem is likely to be far bigger than we realize.

However, on balance of the scientific evidence, the question: is glyphosate safe? seems to be no.

Clearly it is preferable to avoid potential contamination to the environment and food chain by farming organically and by using biodiversity over herbicides and pesticides to increase crop yields.