To understand why processed meat causes cancer we first need to understand the meaning of carcinogens.

Carcinogens are substances, usually external or environmental, that can lead to cancer.

Different carcinogens can result in cancer through a variety of ways. Some might directly affect the DNA of a cell while others could cause cells to divide faster than they should.

Although carcinogens are considered dangerous, they do not always lead to cancer and their cancer-causing potential may vary. After exposure to a carcinogen, the risk of developing cancer usually depends on several things:

Because it is unethical to test potentially carcinogenic substances on human subjects to determine if they are carcinogenic, scientists must use alternative approaches. Usually they study cell cultures or test substances on animals.

Sometimes people are inadvertently exposed to dangerous substances and develop cancer over a number of years of being in contact with a carcinogen. Scientists can then try to conduct an epidemiological study to see if there is a connection before labeling something as carcinogenic.

The International Agency for Research on Cancer (IARC) is an organization that tries to identify the various causes of cancer. They have a system for classifying different carcinogens based on how likely they are to be carcinogenic to humans.

An electronic database maintained by the Environmental Protection Agency (EPA) also rates various substances with a system similar to IARC to describe whether or not something is carcinogenic to humans (1). 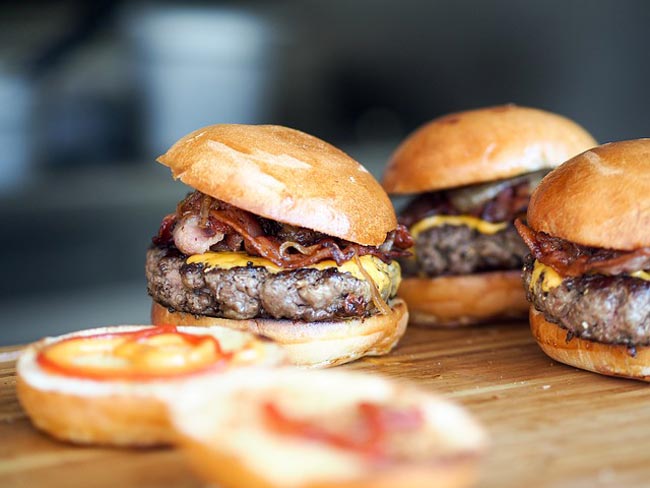 Fast food products like these burgers are cancer promoting.

What is Processed Meat?

Generally speaking, processed meat is meat that has been treated or preserved in some way. Processing is usually done to preserve the meat, extend the shelf life of the product, or add flavoring of some kind such as “smoked”.

Meats can be processed through a variety of methods, including curing, smoking, fermentation, drying, canning, or adding salt, preservatives, and other additives. Although beef and pork are the common types of processed meat products, any kind of meat can be processed.

What Does the WHO Say About Processed Meat?

The World Health Organization (WHO) has put together information on the carcinogenicity of processed meats. There are currently five groups of classification, which are as follows:

The WHO has classified processed meats as Group 1, carcinogenic to humans, because there is enough evidence to determine that it causes cancer.

Epidemiology is the study of how often diseases occur in different groups of people and why. Epidemiological information is used to plan and evaluate strategies to prevent illness and as a guide to the management of patients in whom disease has already developed. (3)

In addition to colorectal cancer, it is thought that processed meat could play a role in stomach cancer, but more research is still needed because the evidence is still inconclusive.

The Global Burden of Disease Project attributes approximately 34,000 deaths a year to a a diet that includes a lot of processed meat.

The risk of cancer usually increases with the amount of meat that is consumed.

Several studies conducted have provided an estimate that the risk of colorectal cancer will increase by around 18% for every 50 gram portion of processed meat that is consumed per day (4, 5). 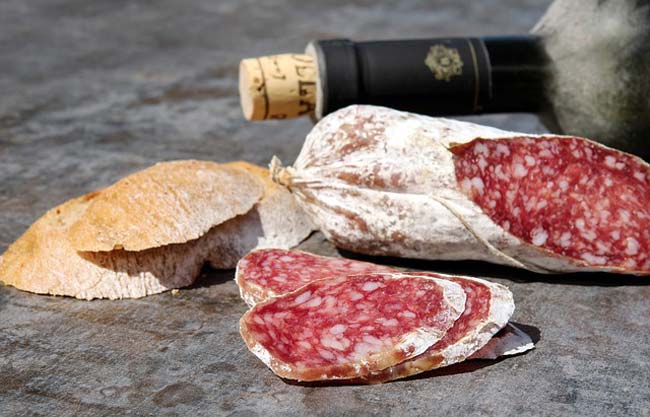 Cured and smoked meats like salami promote cancer in humans.

Research shows that processed meat is much more harmful than red meat and has a stronger connection to bowel cancer.

One study found that participants who ate the most processed meat had a 17% higher chance of getting cancer than those who ate much less (6).

A study of the evidence that red meat has negative health effects was conducted to see how it influences various diseases. It was found that consumption of 100 grams had a variety of increased risk of different diseases, including:

When 50 grams of processed meat were consumed per day, there were statistically significant increases in many of the diseases studied. The findings showed the following increases:

It was concluded that eating high amounts of both red meat and processed meat is linked with a higher risk of developing a major disease or experiencing preterm mortality (7).

Studies on the increased risk of mortality related to eating processed meat have also been conducted. One study followed half a million people for 10 years to determine total mortality and deaths caused by cancer and other diseases.

The results were compared to those who ate white meat instead of red or processed meats and an inverse association was found for both cancer and total mortality.

This led to the conclusion that eating processed meats is connected with increases in not only total mortality, but cancer and cardiovascular disease mortality (9).

From 2002 to 2012, the total cardiometabolic deaths per year decreased overall but the greatest increase was linked to consumption of unprocessed red meat (10).

4 Ingredients in Processed Meat That Cause Cancer

So what is it about processed meat that causes cancer?

There are several components found in processed meats which are particularly damaging and have adverse effects on health.

These cancer-causing compounds are thought to be one of the main reasons that eating processed meat is bad for your health.

They form when sodium nitrite is added to meat to help preserve its color, improve flavor, or prevent bacteria from growing.

Even though nitrite is also found in other foods such as vegetables, it isn’t the same as that found in processed meats which can turn into N-nitroso or nitrosamines.

The main way people get exposed to nitrosamines is through their diet through processed meat and other products.

They form when meat is cooked at high temperatures and have been linked to an increased risk of stomach and bowel cancer.

Another harmful substance found in processed meats are PAHs, which occur when meat is smoked or cooked, including when barbecued.

PAHs often get into the air when meat gets charred or burnt, or from the fat dripping onto hot coals or charcoal.

There have been multiple studies indicating that PAHs can lead to cancer in animals which is cause for concern that they may negatively affect humans too.

Processed meats which are smoked are often thought to be high in PAHs, making them damaging to health.

HCAs are a chemical compound that is formed when meats are cooked, fried, or grilled at a high temperature. Even unprocessed meats such as fish can form HCAs when they are cooked.

It was found that animals who received a large amount of HCAs developed cancer, although the amounts they were exposed to were much higher than humans usually come into contact with.

Still, there have been studies to suggest that eating meats which are well-done, charred or blackened meat can lead to a higher risk of colon, breast, and prostate cancer.

Sodium chloride is the chemical term for table salt which has been historically used as a food preservative or to make foods taste better. However, high salt consumption can lead to a wide array of health problems.

Some of the most common ailments which are thought to be associated with salt intake are hypertension, heart disease, and ulcers which can lead to stomach cancer.

How Much Processed Meat is Safe to Eat?

Although some sources will encourage you to greatly decrease your consumption of processed meat, for optimal health the recommended amount is zero. While moderation sounds comforting, no one wants cancer in moderation.

While outliers may exist – those people we all know who are able to eat unhealthily and smoke without developing cancer or other diseases – the science shows us that eating processed meat isn’t worth the risk.

It’s difficult to quantify on an individual basis just how eating processed meat will affect your body and whether or not you will be one of the many people diagnosed with a life-threatening disease that could have been avoided by cleaning up your diet.

But let's put it this way: if you wouldn’t smoke, then don’t take a chance with your health by eating processed meat either.

What About Red Meat – Is That Safe to Eat?

While red meat is not considered as dangerous as processed meats, it has still been classified by the WHO as a Group 2 carcinogen: probably carcinogenic to humans.

Cooking red meat can also result in the same compounds referenced above which are known or suspected carcinogens.

Red meat is also high in fat and sodium, which are considered risk factors for developing heart disease and have been linked to obesity.

Another issue with red meat is how the haem, part of the pigment which makes blood red, gets broken down upon digestion and creates N-nitroso compounds which can damage the lining of the bowel.

Evidence that red meat is cancer-causing is not as strong as the findings for processed meat.

Still, it is proven that there is a causal relationship between red meat and colorectal cancer. There are studies which suggest that 100 grams per day increases risk factor by 17%.