Calcium is an important mineral that is necessary for the proper function of a variety of different bodily systems.

Although it is most commonly known as an important element for building bones and keeping them strong, it is also necessary for other aspects of health.

One of the ways that calcium is used by the body is to help blood clot, which prevents bleeding to death when you experience a cut or other abrasion.

It also helps with the contraction of muscles, including the beating of the heart – this has the opposite effect of magnesium, which is a relaxant.

Another common use for calcium is to maintain healthy, strong teeth. The majority of the calcium in the body is stored in the bones and teeth.

Because our bodies cannot produce calcium on their own, it is important to get enough of this mineral through our diet.

However, it’s important to note that not all dietary sources of calcium are ideal, and we'll cover that later on.

Calcium is lost on a daily basis through sweating, urinating, and bowel movements. It can also be lost through the natural shedding of skin, nails, and hair.

If the body does not get an adequate amount of calcium, it will start to draw from the reserves stored in the bones which can cause them to weaken and break over time.

Consuming enough calcium on a regular basis will ensure that levels of calcium are continuously replenished. 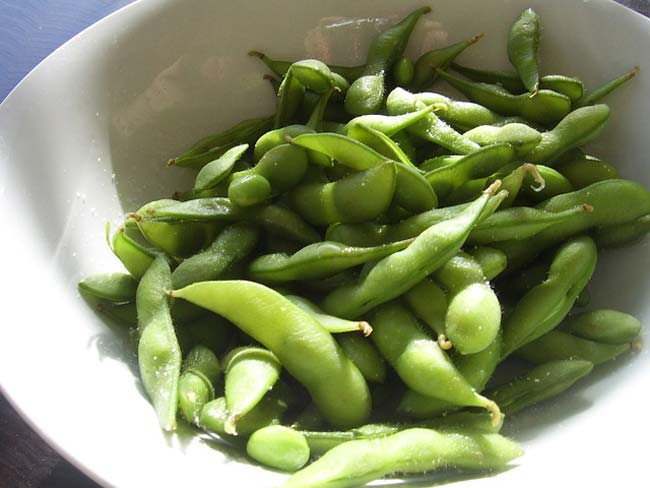 Soya beans are high in calcium.

How Much Calcium Do You Need?

The recommended daily allowance (RDA) of calcium varies depending on age.

1,300 mg per day is recommended for children and teenagers from the ages of 9 to 18 because their bones are growing quickly during this time.

These recommendations are for those in a good state of health. People suffering from osteoporosis or other conditions may need more calcium.

An upper limit of 2,500 mg per day is considered safe and anything beyond that may be harmful (1).

Why Milk isn’t the Only Answer

When most people think of calcium, they might be reminded of milk and all those commercials promoting drinking dairy for strong bones.

However, even though milk does contain plenty of calcium, that does not mean it is a good source of the mineral or that drinking it will have positive health benefits.

In fact, several studies have been looking into the effects of milk on both bone strength and mortality.

Researchers in Sweden followed two groups of people and found that more milk consumption was related to higher rates of bone fracture in women.

The women who drank three glasses or more of milk per day had the highest risk of both bone fracture and death.

For men, those who drank the same three glasses or more each day had an even higher risk of death compared to men who had less than a glass per day.

When milk consumption increased even more, the risk of bone fractures did not decrease (2)

Another 12-year study conducted by Harvard set out to examine whether higher consumption of milk could reduce bone fractures in women.

The researchers did not find any evidence that milk helped to reduce fractures in the bones of their hips or forearms.

On the contrary, women who drank milk three times per day ended up with more broken bones than those who only rarely drank it (3).

These findings were also reflected in another study by Australian researchers who examined hip fractures in postmenopausal women. They also found that milk did not seem to reduce the risk of bone fractures.

In addition to the risk of bone fractures, an article from Harvard Health notes that high dairy consumption has been linked to ovarian and prostate cancer.

So even if milk were beneficial in preventing fractures, the consumption of dairy could potentially have other adverse health effects (5). 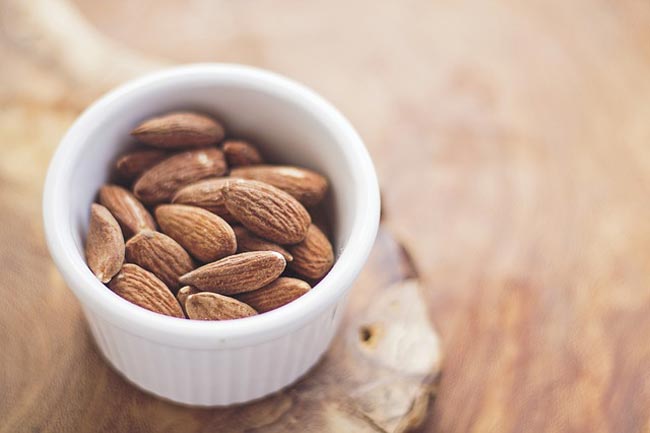 Almonds are packed with calcium.

Why Magnesium is Also Important

Magnesium is another mineral which is important for regulating different biochemical reactions, including the healthy function of nerves and muscles.

It also helps the body to synthesize proteins, regulate blood pressure and is necessary for the synthesis of DNA, RNA, and glutathione.

Furthermore, magnesium helps with the movement of calcium and potassium ions as they move across the membrane of the cells. This process is important when it comes to muscular contraction, nerve impulses, and maintaining a normal heartbeat.

Like calcium, magnesium is also stored inside bones and is also found inside cells. It is also excreted through the urine on a daily basis, just like calcium.

The RDA of magnesium varies based on age and sex, with males from the ages of 14 to 50 requiring the highest amount, 400-420 mg per day.

Many foods contain magnesium, including spinach, beans, nuts, seeds, and grains. Some foods are also enriched or fortified with magnesium to help meet the recommended daily values (6).

How to Increase Calcium Absorption

Even if you are eating a diet rich in calcium, this may not be enough because not all calcium is effectively absorbed into the body.

There are several factors which can affect absorption as well as steps that can be taken to increase calcium absorption.

It is thought that consuming too much calcium can also be detrimental, especially when it comes to the absorption of phosphorus, another element that is important for strong bones.

Vitamin D is also important because it is necessary for the absorption of calcium into the body. Many people are thought to be deficient or to have levels of vitamin D in their blood that are not optimal.

However, spending just 15 minutes in the sun each day can help, as long as you make sure to get sunlight on exposed skin.

The RDA of vitamin D is 5 micrograms (600 IU) each day and can also be utilized by taking vitamins or eating foods that are fortified.

Exercise is another element which helps to retain calcium in the bones. People who are more active usually have stronger bones and more calcium compared to those with a more sedentary lifestyle.

Weight-bearing exercises, in particular, are thought to help with bone strength and prevention of osteoporosis.

Absorption can be negatively impacted if you have too many oxalates in your diet. Oxalates are a type of anti-nutrient that is sometimes found in leafy vegetables such as spinach, Swiss chard, rhubarb, and beet greens.

Even though these foods do contain a lot of calcium, the oxalates in them can potentially inhibit the absorption of calcium.

Other foods that are also rich in calcium such as kale, collards, and mustard greens should be eaten instead.

Another common issue when it comes to calcium absorption is whether or not drinking black tea, which contains tannins, is harmful.

Tannins are thought to alter both the absorption and utilization of minerals such as calcium.

However, studies have shown that the effects were short-term and, after 4 weeks, absorption levels were comparable to a control group (7, 8, 9, 10). 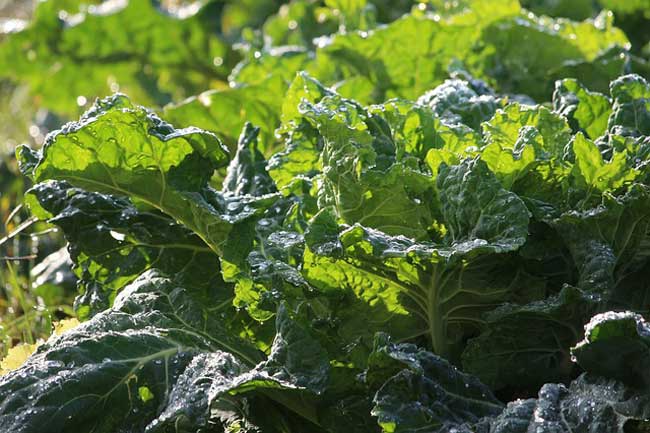 Collard greens are packed with calcium.

How to Reduce Calcium Loss

In addition to ensuring that the calcium consumed in your diet is absorbed effectively, it is also important to avoid things which will keep calcium in your bones.

There are several ways to do this which are easy to implement.

The first is to avoid consuming excessive salt in your diet. Eating too much sodium will increase the amount of calcium that is lost through the kidneys. Try to keep salt consumption around one to two grams each day to prevent calcium depletion.

Make changes to your diet to reduce or eliminate processed foods, salty snacks, and fast foods that have a lot of added sodium. Minimally season foods with table salt or use an alternative such as celery salt or Dulse which have similar tastes.

For your protein needs, rely on plant-based sources instead of eating meat, eggs, and dairy. Animal protein tends to leach calcium from the bones and encourages its passage through the kidneys and into the urine. (11)

Eating plant-based proteins such as beans, grains, and vegetables has been shown not to deplete calcium sources in the body. So opt for a plant-based diet to not only get enough calcium into your body but also to promote its absorption and reduce depletion.

Lastly, it is important not to smoke because this will also cause you to lose calcium. One study looked at identical twins and found those who smoked had a much higher risk of bone fractures, presumably due to a loss of calcium in the bones. (12) 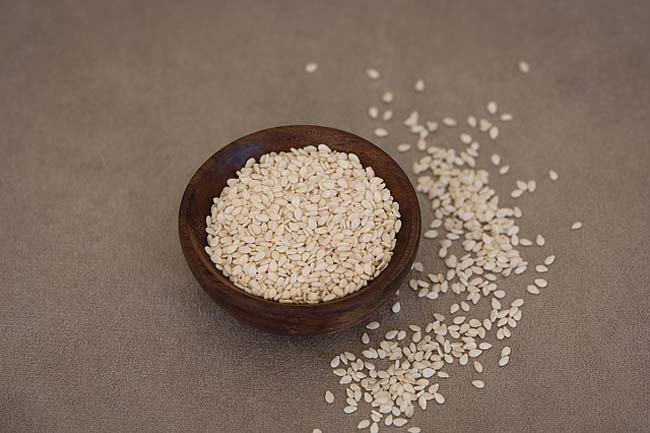 Sesame seeds are loaded with calcium.

Note: Some foods is the above list are good sources of calcium but not practical to eat in large quantities (spices and herbs for example). These should therefore be accompaniments to more substantial, easier to consume foods.