You are here: Home / Morality / How One Inspirational Vegan Mum Educated Her Child’s School Over Chick Hatching 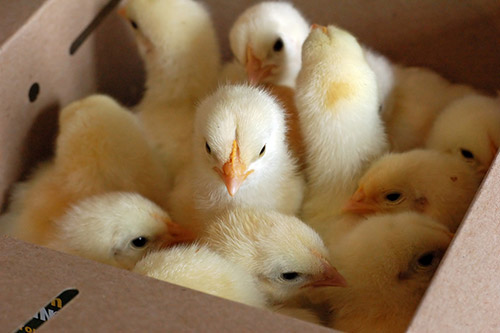 We, as adults, have a responsibility to tell children the truth. We have no right to lie to them and hide the abuse the society they will inherit commits against animals, and indeed other humans.

Culturally, we raise kids to believe that cows and pigs are cute when they're babies, but when they grow up it's okay to eat them. However, we still hide the truth about the abhorrent enslavement and torture behind the slaughterhouse curtain.

We choose not to mention that these once cute babies are imprisoned in dark, dirty, cramped spaces.

We choose not to mention that pigs have their teeth pulled out and tails cut off, or that cows have their calves brutally torn away from them at birth — and that those calves end up either as veal or raped like their mothers to produce milk.

We teach kids that cats and dogs are never to be eaten, but chickens, no, they don't matter. They taste good, with sauce.

We teach kids that milk is necessary, and mummy cows don't mind if we take it from them.

We teach kids that zoos are acceptable because they're fun places to visit.

You get my point here, I'm sure.

Of course, vegan parents are doing the opposite. But boy is it hard.

We've all been subject to the gossip, the whispers, the awkward moments at kids' parties when other parents say things like; “Oh, you don't let her drink milk?” Or, “Don't be mean, just let him have a biscuit”.

And when you get into a conversation regarding the treatment of animals, and the health risks of eating dairy and processed meats, some see you as an enemy of the status quo — “the crazy vegan”.

Yes, that's right, I'm crazy for caring about animals, crazy for wanting an end to unnecessary suffering, and crazy for actually caring what food goes into my child's body.

It takes a brave parent to speak up and keep on explaining why his/her child is vegan, and to put your foot down and go against the deeply engrained culture of schools, other parents and society in general.

In short, it isn't easy to be the outsider all the time. It isn't easy to have to keep making complaints, to constantly keep a watchful eye to ensure that your child isn't being lied to behind your back, and to readily point out when other children in your child's class are being misled to believe that cows, pigs and chickens are happy to be exploited.

But we need to.

Because never should a vegan parent be made to feel like a spoil sport or an extremist of sorts. There is no moral argument against veganism. A plant-based diet gives us all the nutrition we need to be extremely healthy, without the need to harm other sentient beings and destroy the planet we live on in the process.

And that's why the following letter a huge inspiration. It's an motivating example to us all.

You see, when Suzanne's daughter's class was presented with a chick hatching project, she could have just kept quiet and let it slip by. She could have thought; “I don't want to be seen as the only mum to complain”, or, “Well, at least they aren't killing the chicks in class and dissecting them”.

But Suzanne realised something very important: It's not just children who don't understand the impacts a seemingly harmless classroom experiment can have on animals, but teachers (adults) too. Neither do they understand, or perhaps choose to ignore, how the egg farming industry treats these beautiful animals.

And so, because Suzanne wants her child to be raised with the truth, she decided to take action and write to the school.

I think you'll agree that this is an inspiration, and truly motivating, for all us vegan parents.

As mentioned briefly to Mrs (name removed), I am not comfortable with the chick hatching at school. This is for several reasons and I wanted to put these into writing:

Firstly, a school is not a suitable place for chicks to be hatched and raised. As you are no doubt aware, young birds require a very high degree of care and monitoring and have complex physical and social needs, hence why even very moderate animal welfare groups such as the RSPCA are opposed to such programmes. Please see their PDF here.

Secondly, it teaches children that it's ok to take animals away from their parent/s – that animals are disposable, can be used for our entertainment, and their welfare doesn't really matter.

I am a strong supporter of educating children in looking after animals and learning by observing them, and I am sure there are many people who will gladly assist the school in doing so by bringing animals in or arranging visits.

Thirdly, I would like to know what the children are told about what happens to these chicks once they are returned to the farmer?

Did you know that male chicks are usually gassed or thrown (alive) into a macerator because the farmer can't make any money from them?

Are the children told this if they ask what happens to their sweet, fluffy chicks? See article here, there are several others if you Google, and there is a video here that shows what happens to chicks (American, but the practice is the same here).

The dangers of children getting the impression that animals can be disposed of seems to outweigh the benefits of any programme.

Whilst I disagree with the chick hatching programme, I hope that it will at least be an opportunity to educate the children about where their food comes from. Children should know where their fried egg or chicken breast comes from, and how many fluffy chicks have been killed or treated badly to get it.

I hope this isn't going to be skirted around, or the kids told that chickens run around freely on a farm when they go back. Even if the farm they have come from is a genuine free range farm, most aren't (free range only means a tiny bit more space in a barn for most farms/eggs).

Given the points above, I'd like to ask that you reconsider doing this programme again in the future.

Thank you to Suzanne for allowing me to reprint this letter.

Mum to a vegan daughter, Ritar is passionate about ensuring kids get the best nutrition and yummiest meals.