You are here: Home / Health / Is Soy Bad For You? Unearthing The Truth Behind The Speculation
Health

Vegetarians who consume tofu and bean curd as a substitute for meat and dairy products risk severe mineral deficiencies.

The results of calcium, magnesium and iron deficiency are well known, those of zinc are less so.

Zinc deficiency can cause a “spacy” feeling that some vegetarians may mistake for the “high” of spiritual enlightenment.[1]

Remember kids, when on your vegan journey make sure you don’t mistake your zinc deficiency for bodhi. If you will forgive my slightly glib opening and cheap shot, I’m going to attempt to clear up some of the confusion surrounding soy products.

There’s a lot of competing information out there, alternately proclaiming soy to be the greatest food on earth and the secret to long life, and decrying it as a sure way to developing man-boobs and an untimely death. 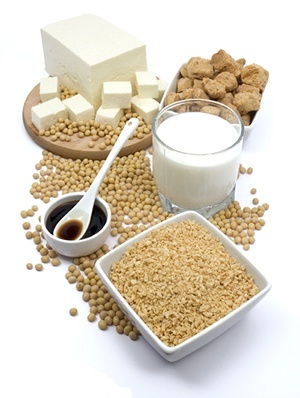 As a vegan and a former professional chef, I am all too aware of the importance of a nutritious diet.

We do after all need to supply our bodies with protein somehow, and the Protein Digestibility-Corrected Amino Acid Score proclaims soy to be analogous to eggs and meat in nutritional value.

So, why do we see so much negative press about soy? Is it just meat industry propaganda, or is there truth amongst the pseudo-science?

What Exactly is Soy & Why do Some People Hate it so Much?

Controversial to say the least. To some it’s the great super food of the modern age, to others it’s tantamount to gorging on arsenic.

Soy beans are a cheap, easily produced and multifunctional oil seed that is responsible for such foods as tempeh, tofu and textured vegetable protein (TPV), as well as the soy milks and sauces you will no doubt be already familiar with.

There are numerous legitimate criticisms regarding the genetic modification of the plant, and it produces protein at a rate of fifteen times that of the same land used for meat production. As a complete protein, soy is, on paper, an outstanding substitute for those following a meat-free diet.

Does Soy Increase the Risk of Cancer?

Well, it depends on who you are, and where you live. If you are a woman born and raised in Asia, the outlook is positive, showing a significant reduction in breast cancer.

Men are also in the pink as “consumption of soy foods is associated with a reduction in prostate cancer risk in men.”

Women in Western societies have no change due to soy intake.

These are the most recent studies currently available, and yet we’re still reading about how phytoestrogens in Soy can promote cancer growth.

Why is this? Why are articles claiming multiple cases of correlation equalling causation?

The answer to my mind is down to sloppy science and false presentation of results by poor writers.

Both of those links are sourced from Weston A Price Foundation board members, who we will discuss shortly. Yes, there are of course concerns about soy; but according to cancer.org, cancer is not one of them. 10% of the total calorie intake by U.S citizens is thought to come from soy, mainly in the form of oil.

With that in mind, if soy is as good for you as a day trip round Chernobyl; shouldn’t we be seeing vastly higher rates of soy related cancer across all sections of society?

In complete contrast to this claim, men who drink soy milk daily have seen up to a 70% reduction in cancer.

I’ll take the word of Harvard and the Cancer Society of America over bad internet science.

The major concern I have with soy with regard to unforeseen risks is twofold.

Primarily, it is a disturbing fact that the vast majority of soy production is from GM crops, and is almost invariably treated with Roundup in the USA, which has shown links to increased rates of cancer.

Roundup is also manufactured by Monsanto, who need no introduction of course as the Darth Vader of crop growing.

OK, Maybe it Doesn’t Cause Cancer, But I Hear it Gives Men Breasts!

Yup, there is technically a link between higher oestrogen and breasts being formed in men. Oestrogen occurs naturally in the body whether you are male or female.

There is a potential negatively impactful soy product, which would be Soy Protein Isolate (SPI). With the explosion in fake meat products and the addition of SPI into many other foodstuffs, there is a risk that the well meaning vegan could gorge on too much protein- but hold on.

Let’s remind ourselves of how we figure out a good diet. We’ve gone vegan, and therefore we are thinking seriously about what we put in our bodies. Do we really want to undo the good work by replacing double cheeseburgers with other food that is potentially bad for us?

If you ate double cheeseburgers every day, you would soon see some negative effects, and it’s a similar story with SPI- although breasts or erection dysfunction would not be attributable to it.

Moderate your intake in accordance with guidelines and a balanced diet, and you can’t go far wrong.

Soy is Destroying the Planet!

The snark in me loves this argument. Soy admittedly is not the greatest crop for soil nutrients. T

his is a fact. However, when paleo websites criticise this (with some justification when discussing Monsanto’s business practices) they invariably neglect to consider the problem we all should be concerned with. Soy is not the problem here. Big agriculture is.

Organic farming with correct crop rotation is far superior to big agriculture and, for our paleo friends, let us not forget that the meat industry is the largest pollutant on the planet bar none. Yes, that includes all transport and all oil extraction.

Look, everything we humans do is likely to have a negative effect on the environment.

There is an ethical responsibility on us to purchase our food from responsible sources, and to encourage this behaviour in others.

When meat eaters point to soy and cry foul, it is rank hypocrisy. With that in mind, shop local, and buy organic when you can.

If All that is True, Where Does the Hate for Soy Come From?

The answer, it might not shock you to know, comes from an organisation bankrolled by the meat and dairy industry. The quote at the top of this article and every article that I found criticising soy for health effects invariably references (or is written by) the Weston A Price Foundation; this article is one of the worst offenders.

So what? Well, the WAPF is funded by donations, primarily from dairy and meat industry farmers. The organisation is an advocate for raw milk, claiming that pasteurisation diminishes the nutritional quality of milk. The USFDA stated the claims were “false, devoid of scientific support, and misleading to consumers.”

You may begin to see where the bias behind the complete hogwash science comes from. What possible motivation could a pro meat, pro dairy organisation that is bankrolled by farmers have for denigrating soy? Curiouser and curiouser.

No one is saying that soy is perfect- as discussed; the farming practices particularly in the USA are particularly bad. Let us however be perfectly clear. The meat industry as it stands is completely unsustainable, disastrous for the environment and unequivocally bad for the health of human beings.

Even “organic” grass fed animal farming is unsustainable. Humans do however need a source of protein, and as already stated; soy is fifteen times more efficient at producing protein per acre compared to meat production, which also uses a large amount of soy as animal feed.

In summary, unless someone brings actual hard evidence instead of obfuscation and nonsense non-science to the contrary, we are safe consuming soy as part of a balanced diet, as human beings have done for centuries with no ill effects, and empirically proven positive effects.

For example, Okinawa, Japan has a higher percentage of centenarians than anywhere else on Earth.

In addition to exercise and spiritual well being, a high carb, plant based diet is the root of their longevity.

In contrast, Stephen Byrnes (one of the board members of the Weston A Price Foundation) died in 2004, aged 45, from a stroke. He claimed to enjoy a robust diet, high in offal. I think I’ll stick to the soy, if it’s all the same to you.