From cakes and pastries to sauces and dressings, eggs have played a big part in baking over the last century.

In fact, the very prospect of baking a cake without eggs appears seemingly impossible for most.

Eggs influence the structure, consistency of baked goods, acting as a reliable binding agent to ensure your cakes don't sink.

Unfortunately though, the egg production industry is a cruel one. It involves the murder (gassing/macerating) of millions of male chicks every year, and keeps hens in a perpetual cycle of laying in unnatural conditions.

Even backyard eggs are problematic.

No one wants to support hurting innocent animals, so it's good news that in the modern day we have vegan egg alternatives for eggless baking and cooking.

It's also good news for those who have an egg allergy but still want to enjoy desserts.

The list below provides numerous egg alternatives, all of which are easily obtained from your local grocery or health food store. 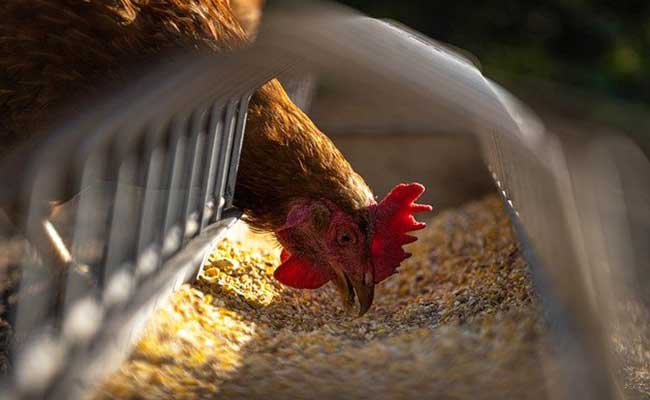 Avoiding the use of eggs will stop the cruelty to chickens.

Let's start with some alternative ingredients that you may have to hand, and if don't fancy experimenting with these, you can check out the egg replacement formulas later down the page. You can jump to the replacers by clicking here.

First up is apple sauce. Besides being calorie-free, this vegan egg replacer adds moisture and flavor to cookies, cakes, muffins, and bread.

You can purchase apple sauce commercially or make it at home with fresh apples. When baking, use one cup of unsweetened apple sauce as a substitute for one egg.

As with all replacements, you'll need to check the recipe for the amount you need to use. Moreover, as a baker, you'll know that it takes a bit of experimentation to get the perfect mixture.

Flaxseed is rich in antioxidants, protein and omega-3, making it a super healthy replacement for eggs.

This versatile seed has a binding quality that will stabilize bread, muffins, cookies and other cooking like vegan burgers and meatballs.

Stir together one tablespoon of ground flaxseed and three tablespoons of water, then let it stand for five minutes until thickened before adding to your baking.

One of the easiest egg substitutes, banana adds moisture and sweetness to plant-based recipes.

When using banana, you will need to use more raising agent (baking powder) than usual to avoid having an overly dense bake.

Banana is idea for cakes, pancakes, and brownies. Mash up a medium ripe banana and use it in place of one egg.

Silken tofu adds a creamy texture to your cheesecakes, ice cream, or puddings, while firm tofu works well for dishes such as quiches, lasagne, vegan egg salad, or scrambled eggs.

Use 1/4 cup pureed silken tofu in place of one egg.

Aquafaba is the starchy liquid left over from cooking legumes. The word means ‘bean water’ in Latin.

The protein and starch structures of bean water are similar to egg whites, which is why you can easily use this by-product as a vegan alternative to egg whites.

For ease, drain the water from a can of beans or chickpeas and use that.

In most recipes you can substitute eggs with nut butter. Three tablespoons of nut butter is a replacement for one egg.

Using nut butter in brownies, pancakes, and cookies will provide the best flavor. Use creamy nut butter instead of chunky varieties so that the mixture is smooth.

As a thickener and binding agent, tapioca starch is used in sauces, puddings, and condiments, and is commonly used to make vegan mayonnaise.

You can replace one egg with a mixture of one tablespoon of tapioca starch and three teaspoons of water.

Chickpea flour is a natural egg substitute that works as both a binding and raising agent.

Chickpea flour has also become a popular egg substitute in omelettes and quiches because of its similar texture and taste.

You can find chickpea flour in many health stores and grocery stores.

This legume from South America contains high levels of starch. Arrowroot powder resembles corn starch and can be used in normal cooking and baking.

The high sulfur content in black salt produces a strong taste that resembles egg, making it a commonly used ingredient in vegan cooking.

The salt is available at specialty shops and online stores but is becoming more widely accessible in supermarkets. Like normal salt, it is best to use it moderately.

If you can't be doing with experimenting with different egg alternatives here’s a list of egg replacers, many of which you can easily purchase on Amazon.

Ener-G Egg Replacer is great for recipes that require a whole egg—with the white and yolk. This replacer is made from potato starch and tapioca starch flour.

Perfect for binding cakes together, Ener-G Egg Replacer is vegan, gluten-free, free from preservatives, and non-GMO. Best of all, one serving is just 15 calories! 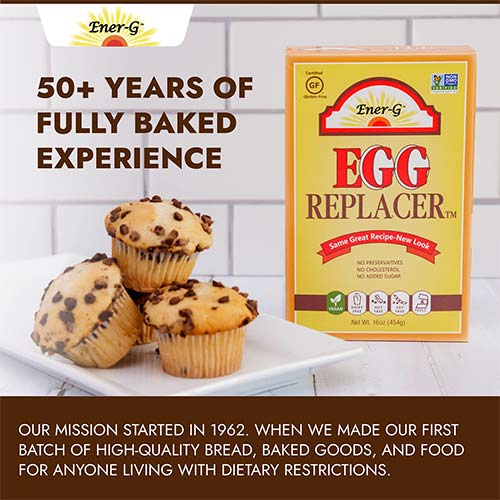 Follow Your Heart's egg substitute comes in a carton and is a versatile baking ingredient.

Aside from being gluten-free, non-GMO, and kosher, it's also organic. Soymilk powder is the principal ingredient, and the flavor is based largely on black salt, which we discussed earlier in the article. 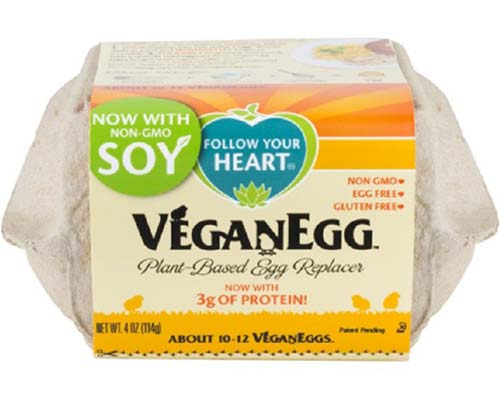 This gluten-free, vegan, and kosher egg alternative is made with baking soda, potato starch, psyllium husk fiber, and tapioca flour.

It's a hugely popular product and has been around for many years. Perfect for muffins, cookies, and bread. 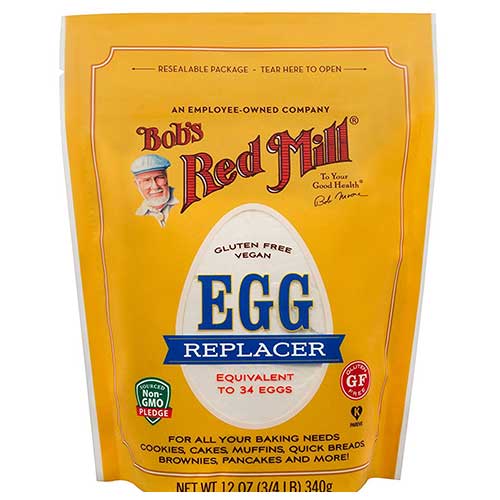 An excellent nutritional replacement for your breakfast egg options, Orgran's Vegan Easy Egg has the highest protein content on this list at 7.5g per serving!

Non-GMO and allergen-friendly, it's high-fiber and low-fat content make it a fairly healthy choice too. 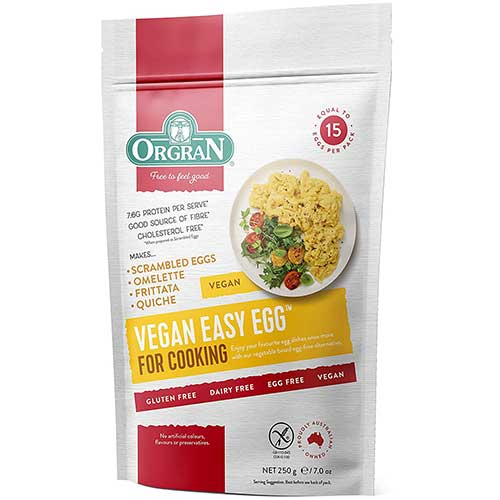 Neat Egg Substitute is 100% plant-based, gluten-free, and made with all-natural ingredients. It works well in recipes where eggs are used as a binder, such as in baking brownies, cakes, cookies, and muffins.

A 4.5 oz pack of this replacer is equivalent to 18 eggs, with one serving coming in at 25 calories and 2g of protein.

To replace one egg, mix 1 tablespoon of Neat Egg with two tablespoons of water. 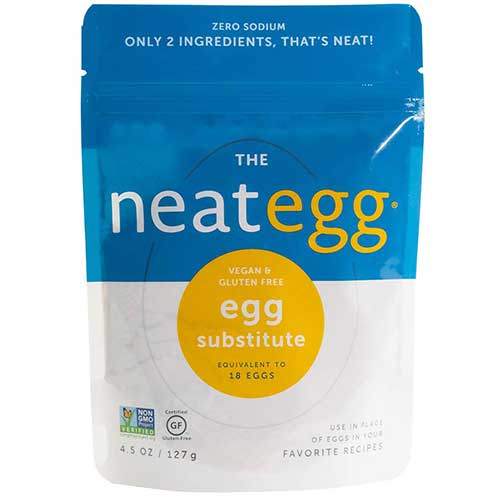 This vegan egg replacer is low in calories (just .10) and is a great replacement for baking and scrambles.

Vegg is made with pea protein, botanical yeast (fortified with B-12, folic acid, and iron), xanthan and guar gum, and a pinch of black sea salt.

Unlike chicken eggs, it doesn't contain any cholesterol or antibiotics, and is of course cruelty free.

You can also find JUST Egg in frozen and cooked versions too.

Soy is an excellent source of complete protein. This offering, again from Bob's Red Mill, is designed to replace egg whites to firm up and add moisture to your baking.

For pancakes, scrambling, and French toast use the Egg Basics product, and for pastries, dressings, and mayo use the Bake Basics version.

A tasty egg alternative made with lupin beans, Simply Eggless is suitable for almost all recipes that require eggs.

This egg substitute offers 3g of protein per serving and 8% of your calcium daily value.

Along with giving up cheese, baking without eggs is probably one of the hardest transitions to make. Pretty much every dessert recipe passed down from our parents contains egg, particularly cakes and cookies.

Many people run into disappointment on their first couple of attempts. If a cake doesn't rise well or the cookies are too soft, you can begin to feel like nothing is a good enough egg alternative.

But don't give up. The huge number of people baking delicious vegan cakes these days is testament to the fact that this change is possible but just takes a little practice.

As you evolve your cooking to exclude animal products, you'll enjoy your culinary exploits that much more, knowing that your kitchen is a compassionate one. Enjoy your eggless baking!