Most people enjoy having a banana for breakfast or as a convenient on-the-go snack. But did you know that there is an ideal time to eat a banana depending on its level of ripeness?

The best time to eat any fruit, including bananas, is when it is fully ripened. Bananas that are ripe have a peel that changes from green when picked to yellow with brown spots when ripe.

Bananas are super-healthy and are most nutrient-rich when brown. Bananas contain the following:

According to a large analysis of many studies, daily consumption of 1.3 to 1.4 grams of potassium is linked to a 26% lower risk of heart disease .(1)

Ripe bananas are more easily digested because the starch has mainly turned to sugar.

Green bananas contain up to 70-80% starch, but during ripening the starch is converted into sugars and ends up at a volume of less than 1% when the banana is fully ripe. (2)

Although it is best to eat bananas after they become ripe, it is possible for them to become too ripe.

The browner a banana gets some of the micronutrients diminish. In terms of nutrient density and digestibility, the perfect time to eat a banana can be seen in the picture below. 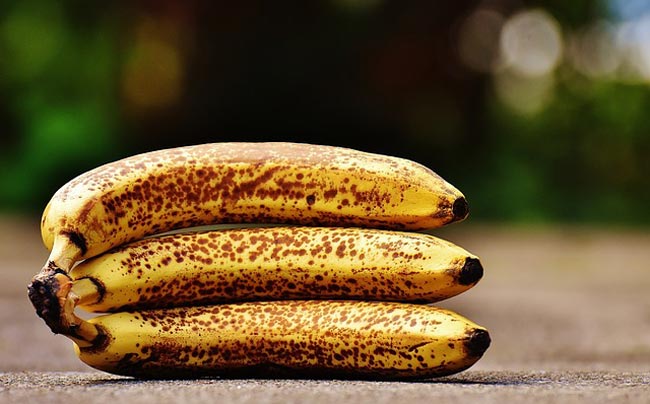 Why Do Bananas Turn Brown?

Many of us consume bananas outside of the country we live in. This means that they are picked when they are unripe and the peel is still green.

However, over time, the amino acids start to transform into ethylene gas which causes the fruit to ripen as the acids in the fruit get broken down.

Sometimes ethylene gas is added to help the bananas ripen quicker if they are picked close to the place where they are sold. However, most growers pick their fruit while the peel is still green because the bananas are often shipped over long distances.

To expedite the ripening process, bananas can be put inside a bag so that the ethylene gas which is released will remain trapped and cause the fruit to ripen faster.

1. The peel turns from green to yellow to brown

Bananas start out with a green peel which gets its color from the chlorophyll in the plant, an important element of the photosynthesis process.

As the banana ripens, the green pigments get broken up and are replaced with the yellow color characteristic of a ripe banana.

2. Because bananas produce much more ethylene than other fruits, they will become over ripened and the yellow parts of the banana will decay and become brown. This process is called enzymatic browning.

The ethylene in the banana causes the fruit to go from firm and solid to soft and mushy inside.

A banana’s fruit will also become sweeter as it ripens, causing the banana to become up to 80% sugar.

A banana will also turn brown when it is bruised or damaged. Bananas that are dropped start to produce even more ethylene and will, therefore, become brown much faster.

Although some people might be grossed out by the brown spots on a banana, there are many positive health benefits to eating bananas once the spots develop.

One study examined the effects of fruits and vegetables on priming cytokines, which are measured as a way to determine the immunological state.

Scientists found that this activity was increased in the group with bananas that were more mature or ripened (3).

TNF is a cell-signaling protein that plays a role in regulating immune cells and making sure that cells travel to areas of inflammation and infection. It also helps to prevent tumor cells from growing or spreading and can destroy cancerous tumors.

Many studies have shown that TNF has anti-tumor effects and can help prevent and treat cancerous growths.

It was also noted that bananas contain dopamine and serotonin and that the dopamine content in the peel increased after the banana ripened.

This is important because dopamine is often used as a diuretic while serotonin helps with mental stabilization and helps fight against anxiety and depression.

One study even found that bananas with dark spots were almost as effective as an intravenous anti-cancer drug called Lentinan that is taken to stimulate the production of white blood cells (4).

Because of their high concentration of TNF, bananas can be effective in helping to fight cancer. But they must be ripened with a yellow peel and brown spots. Bananas with a green peel were not found to work as well as ripened ones.

Other Benefits of Bananas

Several antioxidant flavonoids are found in bananas. The most important of these is catechins, which have been linked to a reduced risk of cardiovascular disease (5).

The antioxidants in bananas also help the body to protect itself from inflammation.

One study found that bananas contained high levels of dopamine, which has anti-oxidative potency. The dopamine levels were found to range from 80-560 mg per 100g in the peel and 2.5-10 mg in the pulp (6).

Foods high in antioxidants are thought to fight against free radicals in the body, which are associated with a multitude of diseases, including cancer.

Fiber is important for digestion because it feeds the good bacteria in the gut. It can also help to prevent blood sugar from increasing after eating meals high in carbohydrates.

Bananas contain approximately 3.1 grams of fiber per medium-sized banana. As the banana ripens, the flesh turns from starch to sugar.

Ripe bananas have a value of 60 and, in addition to their GI value, they also contain pectin which can help balance blood sugar levels. 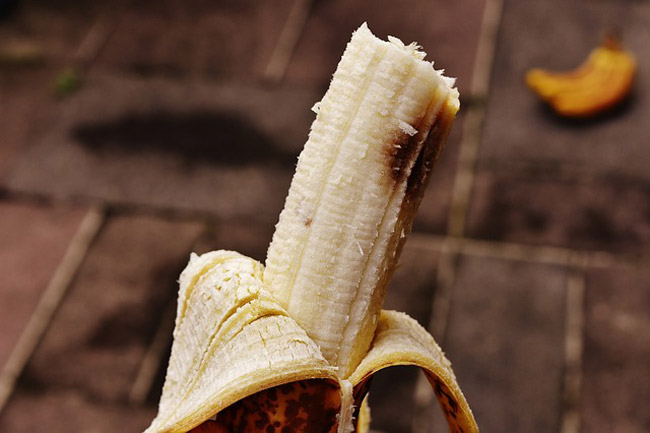 If you’re waiting for your bananas to become ripe and develop brown spots, you might miss the window for eating them at their ideal time – a bunch of bananas may all become ripe at the same time, making it difficult to eat them all during their peak ripeness.

Not to mention some people don’t like the taste of overripe bananas because they can become very sweet and mushy.

Fortunately, there are many ways to use brown spotted bananas so they don’t go to waste. You can also get creative and find ways to eat them if you find ripe bananas to be too sugary or soft for your liking.

One of the best ways to preserve the bananas once they ripen is to freeze them. First, let the bananas ripen on the counter or try putting them in a brown paper bag to ripen faster.

Once they develop brown spots, peel them and place them on a tray in the freezer. It will take several hours for them to become fully frozen. After they freeze, all the bananas can be combined in a plastic bag and kept for later use.

It’s important to place the bananas on a tray and freeze them individually so they do not stick together once frozen.

If you simply peel several bananas and toss them in a bag together, you will end up with a big frozen block of bananas that will be difficult to use later.

While it’s tempting to put a whole banana into the freezer, it’s important to peel them before freezing.

It’s difficult to peel a frozen banana so you would have to wait for it to fully thaw out in order to peel it and, even then, the peel may not easily come off and will likely become a sticky mess.

Frozen bananas are perfect to include in a smoothie along with other fresh or frozen fruits, green leafy vegetables and water or juice.

You could also use frozen bananas as the base for a milkshake by adding in a favorite plant-based milk for creaminess.

You can also make dairy-free ice cream (or “nice” cream) using frozen bananas as the base. Just blend the frozen bananas and add in any flavors or toppings such as nuts, cacao, peanut butter, coconut flakes, and maple syrup or other sweeteners such as agave.

Ripened bananas have a very high sugar content, making them perfect for baking. Add in some mashed up banana to make delicious snacks and desserts such as banana bread or muffins.

Bananas can also be baked in foil in the oven to make them even softer and gooey. If you’re camping, you could swap your oven for the hot coals of a campfire. Then top them with your favorite fruits, nuts, or some whipped topping.

Another banana-based dessert is banana pudding. Just add the mashed bananas into the cake batter or combine with leftover bread for a quick bread pudding. Cookies and energy bars can also benefit from adding banana.

Incorporate bananas into your favorite breakfast foods such as pancakes and French toast by adding mashed bananas into the batter.

Bananas can also be sliced on top as a garnish before drizzling on maple syrup or dusting with powdered sugar.

Bananas are also delicious when mixed into oatmeal or simply sliced on top of a bowl of cold cereal before adding a splash of non-dairy milk. Then sprinkle on some cinnamon and add nuts for texture for a balanced breakfast.

Once dehydrated, they turn into banana chips which can be eaten as a snack or mixed in with other nuts and dried fruits to make trail mix.