You’ve probably seen dandelion growing on your lawn or on the grass in your neighborhood park.

Also known as white or wild endive, and fairy clock, the contemporary name seems to have originated in the 15th century when a surgeon compared dandelion to a lion’s tooth: dens lionis, or dandelion.

These bright yellow flowers originated in Western Europe but now grow in many other parts of the world.

Dandelion is a perennial plant that does well in sunny, moist areas but can also thrive in environments that are sometimes harsh.

The seeds travel easily on the wind, which makes it easy for the plant to spread further afield.

Today, most gardeners think of dandelions as a weed and they are often treated with chemicals to prevent them from growing in lawns.

Because they can be so prevalent, they might be unwanted in certain areas, but historically they have been respected for their medicinal properties and health benefits.

Dandelion plants have been used in Chinese and Arabian medicine for hundreds of years, and more recently in Europe.

The leaves, stems, flowers, and roots are used medicinally while some parts are used in cooking or to make wine, and can also be roasted to make a coffee substitute. 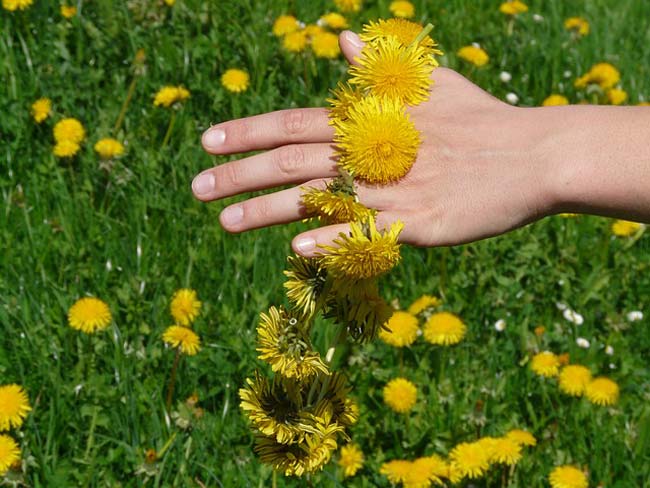 Dandelion is said to detoxify the liver. It is thought that the compound taraxacerin, which is found in the dandelion root can increase the secretion of bile from the gallbladder. This may help the liver flush out waste more effectively and rid the body of harmful toxins.

Dandelion also appears to have a protective effect on the liver. One animal study in which liver tissue was exposed to dangerously high levels of acetaminophen found that dandelion had a positive effect.

The results of the study demonstrated that dandelion was protective against the induced toxicity (1).

Two additional studies on animals also found other positive benefits on the liver. One found that dandelion helped to suppress lipid accumulation in the liver and also reduced insulin resistance.

Another found that dandelion may have anti-diabetic properties but recommends further research be conducted (2, 3).

Dandelion may have several properties that can help with immunity and support the body when it comes to fighting infection and disease. The plant is thought to have both antimicrobial and antiviral properties.

In a test tube study, researchers found that dandelion could slow the growth of the hepatitis B virus in both human and animal cells. The plant may be able to work against oxidative stress while also blocking protein synthesis to prevent DNA replication (4).

Another study on the HIV-1 virus found that treating infected cells with dandelion extract helped to inhibit retrovirus replication.

The extract had a strong effect against the virus and led researchers to conclude that extracts may be used to develop antiretroviral therapy for HIV patients that would have fewer side effects (5).

Another study confirmed these results and found that dandelion was also moderately active against several other pathogens such as E. coli (6, 7).

In the past, dandelion has been used to help ease the pain of stomach ailments, indigestion, and constipation.

One animal study found that dandelion increased stomach contractions and intragastric pressure. It also helped decrease the resistance of food when emptying from the stomach into the small intestine (8).

Dandelion root is also rich in prebiotic fiber inulin which research shows may help increase the frequency of bowel movements, stool consistency, transit time, and the hardness of stool. This may mean it has mild laxative effects that can relieve symptoms of constipation (9).

Dandelion is also rich in beta-carotene, an antioxidant that has been shown to have protective effects on cells against oxidation and cellular damage.

It also contains polyphenols, another powerful antioxidant. The polyphenols are concentrated in the flower but also present in the roots, stems, and leaves (10, 11).

The antioxidants and other compounds in dandelion have been found to have anti-inflammatory effects.

Studies that treated cells with dandelion found they had fewer inflammation markers and protected cells from oxidative stress-induced cell death (12, 13).

Herbal medicine has long used dandelion because it is thought to have diuretic effects. This could lead to lower blood pressure ,which is often a result of diuretic medications that flush excess fluid from the body.

One study with humans found that dandelion extract showed promise when used as a diuretic but this study was quite small.

Another study found that potassium may help with blood pressure and because dandelion contains potassium, it may have a similar effect. Further research is recommended (14, 15).

Dandelion plants grow everywhere because the seeds are so easily scattered by the wind.

There is some research that suggest dandelion may help with weight loss because it can help improve the metabolism of carbohydrates and also reduce the absorption of fat.

However, it is still unclear if this will aid in weight loss and more studies need to be conducted (16).

One study that looked at overweight mice found that chlorogenic acid, which is found in dandelion, helped to reduce their weight and regulate hormones and lipid metabolism. But studies specifically using dandelion have not had the same results (17).

Another animal study that did use dandelion supplements found that the animals did ultimately lose weight. However, that was not the primary focus of the study and it’s unclear if the dandelion was the sole cause of weight loss (18).

There have been studies that suggest dandelion may help reduce cholesterol. One animal study found that rabbits who consumed dandelion roots and leaves experienced lower cholesterol.

This suggests that dandelion could be protective against atherosclerosis, which is brought on by oxidative stress (19).

Studies on the effects in humans are still required to determine if dandelion will be equally effective in lowering cholesterol (20).

Dandelion may have some protective effects when it comes to skin damage from the sun.

One study analyzed skin cells in a test tube and found that dandelion helped to reduce the impact of damage from UVB rays.

The extract of leaves and flowers helped to absorb the UVB irradiation and are considered to be protective agents for the skin (21).

Another skin-boosting effect was found in a test tube study that showed dandelion extract could help the growth rate of skin cells. A higher rate of cell turnover could result in more youthful appearing skin and could promote slower aging (22).

Dandelion has antihyperglycemic, antioxidative, and anti-inflammatory properties. It is thought that this could help to regulate blood sugar levels in those with type 2 diabetes.

Researchers found that initial research is promising but more data is needed for greater certainty (23).

Furthermore, two compounds found in dandelion called chicoric and chlorogenic acid have been shown to help with insulin secretion, leading to improved insulin sensitivity and lower blood sugar. It is unknown if dandelion contains enough of these compounds to be an effective treatment for high blood sugar (24).

11. May Reduce the Risk of Cancer

There is some research to indicate that dandelion can help slow the growth of certain types of cancer.

The majority of research has been conducted in test tubes, with one study in particular finding that dandelion extract can slow the growth of liver cancer cells (25).

Another study found that extract from dandelion leaves was effective at slowing the growth of breast and prostate cancer cells. Another study had similar results when it came to pancreatic cancer cells, while another saw that dandelion root extract slowed colorectal cancer (26, 27, 28).

Although there is not a lot of research specifically on the effects of dandelion on bone health, there are many properties contained within the plant that are known to contribute to strong bones.

The greens are rich in calcium and vitamin K, nutrients that have been linked with preventing osteoporosis and improving bone health (29, 30).

13. Contributes to a Health Diet

This unassuming little plant is packed with vitamins and minerals.

Dandelion greens can be cooked or eaten raw and are rich in vitamins A, C, and K, and contain vitamin E, choline, and folate.

Dandelion root is a good source of inulin, a carbohydrate that is also soluble fiber. Dandelion is low in calories an naturally low in fat too.

Those who suffer from anemia usually have fewer red blood cells, which is a result of iron deficiency – either through low dietary intake or poor absorption rate.

Because dandelion is rich in iron, it may be useful to consume it to counteract anemia. One study found that dandelion extract helped to increase the number of red blood cells in mice (31). 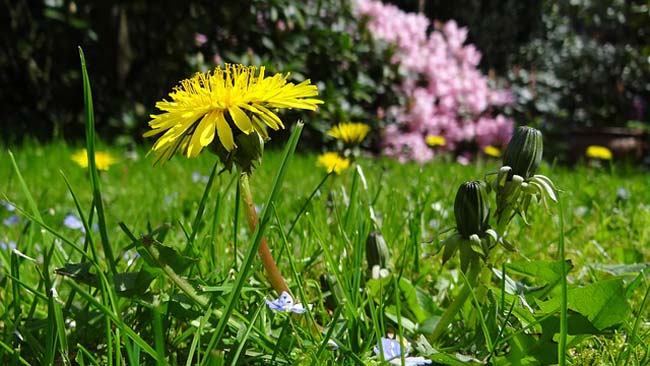 Dandelion flowers can be cooked or eaten fresh in a salad.

Consumption of dandelion is often raw in the form of salads or lettuce mixes. It is also possible to purchase dandelion supplements and drinks such as tea or coffee that contain dandelion root. Other capsules, tinctures, and extracts can also be purchased in supplement form.

Currently, there are no guidelines on the recommended dosage for dandelion supplements.

Some suggestions depend on the part of the plant that is being consumed.

Both fresh and dried leaves should not generally exceed 10 grams per day, while tinctures and juices may be taken per tablespoon up to several times a day. For dried powder, it is not recommended to exceed 1,000 mg four times per day.

The FDA considers dandelion to be safe for consumption and supplementation. However, some people may be allergic and supplements may cause a negative reaction.

Those who have known allergies to plants like ragweed, marigolds, or daisies should avoid dandelion supplements.

When taking medications such as antibiotics or diuretics, there is also the potential for a negative reaction. If you are on medication, it is best to consult with your physician to see if there is a risk of side effects from dandelion supplementation or consumption.

Those who wish to add dandelion to their diet are cautioned against picking dandelions straight from the ground or in their backyard. This is due to the risk of contamination from animal droppings and pesticides and other chemicals sprayed on the ground/lawn.

In conclusion, research has found that there are many dandelion benefits to validate its use for health purposes. It is also considered generally safe due to low toxicity. However, further research is needed in specific areas to fully understand the cumulative benefits of dandelion consumption in the long term.