You are here: Home / Health / Can Elderberry Prevent & Treat Flu? Here’s What the Science Says
Health

Elderberry or elder, are a genus of flowering plant that belong to the Adoxaceae plant family.

Historically, different parts of the elderberry tree have been used for medicinal purposes, but it seems that only in the last two decades science has caught up with what our ancestors may have known all along: that elderberry can help prevent and treat colds and flu. 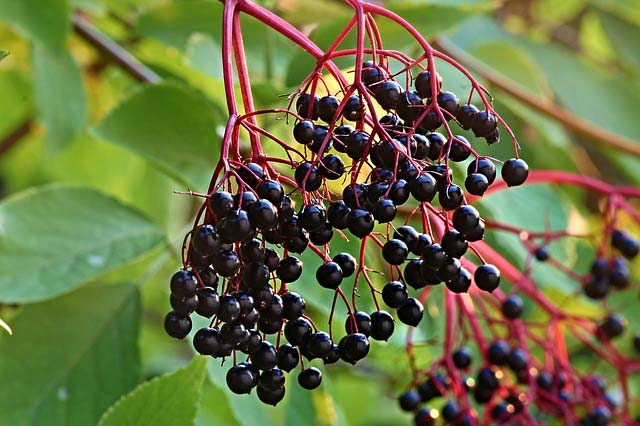 Let's be clear about what the flu is. It certainly isn't a bad cold. It is a contagious respiratory illness caused by a virus that infects the nose, throat, and lungs.

It may initially start with symptoms similar to the common cold, but the flu develops into more severe symptoms and can lead to infections and even pneumonia.

In addition to a runny/stuffy nose, symptoms of the flu generally include a high fever, body aches, fatigue and cough.

Many people begin to recover within a week, but for more vulnerable persons recovery can take as long as 3 weeks, and it may be up to 6 weeks before you feel fully back to your usual self.

Flu requires bed rest and hydration while the virus runs its course.

So is it possible that a simple berry can help tackle this serious virus?

Elderberry for Flu: What the Science Says

Elderberry has long been promoted by alternative medicine advocates as a way to prevent and treat flu. As such, researchers have thoroughly investigated these claims to determine whether or not this is just an old wives' tale.

In one study, researchers examined whether elderberry syrup could treat the flu by administering it to sixty people who had been experiencing flu-like symptoms for 48 hours or less.

The patients received 15 ml of elderberry four times a day for 5 days and recorded their symptoms. Those who took the elderberry syrup reported that their symptoms were relieved on average 4 days earlier than those in the placebo group.

Symptoms were relieved on average 4 days earlier and use of rescue medication was significantly less in those receiving elderberry extract compared with placebo. Elderberry extract seems to offer an efficient, safe and cost-effective treatment for influenza (1).

It is well documented that traveling abroad can lead to respiratory illness and the development of cold or flu-like symptoms, because of lowered immunity due to stress and tiredness, but also due to exposure to viruses airplanes and new environments one doesn't usually visit. on

Researchers set up a study to see if elderberry extract had any beneficial effect on the health of travelers.

312 passengers traveling abroad from Australia were studied. They tracked their common cold episodes, including duration and symptoms in a diary. They noted their symptoms before traveling and then again 4 days after travel.

Those in the elderberry group took capsules twice a day before leaving, and 3 capsules per day while overseas – up to 4 or 5 days after arriving at their destination.

Participants in the placebo group had a much longer duration of common cold episode days (117), compared to 57 days in the elderberry group.

The severity of their symptoms was also recorded at a higher level: 583 versus 247. Taking elderberry appeared to reduce the duration and severity of illness.

These data suggest a significant reduction of cold duration and severity in air travelers. More research is warranted to confirm this effect and to evaluate elderberry’s physical and mental health benefits (2).

A pilot study in Singapore studied the effects of elderberry extract that was formulated into a slow-dissolve lozenge. Sixty-four patients who were experiencing three or more flu-like symptoms for less than 24 hours participated in the study.

They were given 4 doses of 175 mg of the elderberry extract per dose for two days and then monitored their symptoms.

Those who took the extract experienced improved symptoms and, after 48 hours, 28% had no symptoms, 60% had a lot of relief with only one or two mild symptoms.

No adverse effects were observed in either group indicating that the proprietary elderberry extract is safe and highly effective in treating flu‐like symptoms. 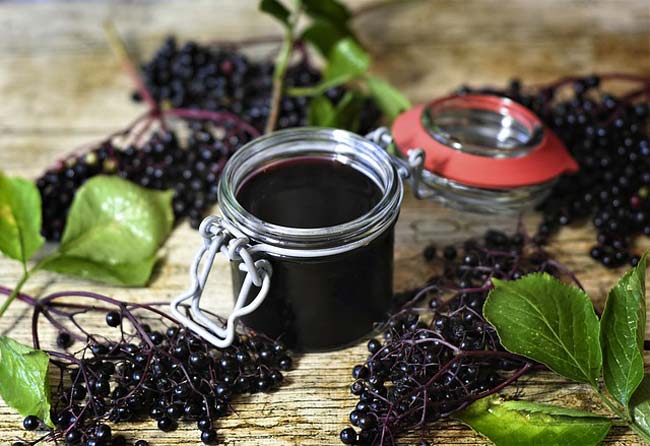 In-Vitro studies are performed with microorganisms, cells, or biological molecules outside their normal biological context. We wouldn't be able to see exactly what is going on inside the cells of a patient while they are experiencing flu, so we recreate the envionment outside the human body.

The flu virus can lead to pneumonia. Researchers tested black elderberry to see if they could find antimicrobial and antiviral activity that could be used against the bacteria responsible for upper respiratory tract infections.

An in-vitro study, where the extract was applied to cultures, showed that elderberry does have antimicrobial activity. They also found it to have an inhibitory effect on the spread of the influenza virus.

Rubini elderberry liquid extract is active against human pathogenic bacteria as well as influenza viruses. The activities shown suggest that additional and alternative approaches to combat infections might be provided by this natural product (3).

Another study found that the flavonoids in elderberry can bind to a virus and help to prevent it from infecting host cells. This study demonstrates the antiviral properties of elderberry and may explain why other studies in humans have been successful.

Elderberry flavonoids bind to and prevent H1N1 infection in vitro (4).

The findings reflect what several other studies have found about the effectiveness of elderberry to decrease the duration and severity of flu symptoms.

The anti-influenza activity of elderberry was further researched and shown to be an effective treatment for the flu. And in perhaps the most remarkable study, researchers found that the compounds in elderberry inhibit the entry of the virus into cells and strengthen the immune system against it.

This antiviral activity was attributed to the phytonutrients in the elderberry such as anthocyanidin. The impact of elderberry was even stronger in the post-infection phase when the virus had already infected cells. 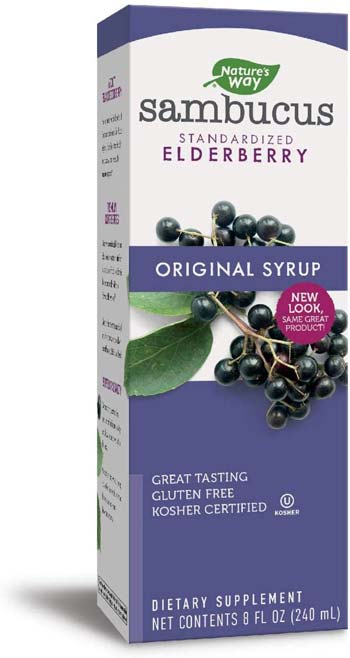 => You Can Buy Elderberry Extract Here

Elderberry can help prevent and treat flu, but it also has other notable health benefits.

Elderberry is high in antioxidants, including polyphenols, which help protect the body against the effects of oxidative stress.

Elderberry also contains anthocyanins, which have anti-inflammatory effects, and flavonols, a class of phytonutrients that have been associated with many health benefits from cancer prevention to weight management (6).

The flowers of elderberry trees contain high levels of antioxidants (7). Elderberry is also a good source of vitamin C, with just 100 grams containing up to 60% of the daily recommended value.

Other nutrients include high amounts of vitamin A, up to 20% of the RDA in 100 grams, which is more than blueberries. They also contain phosphorus, calcium, iron, potassium, and manganese.

Elderberries don’t have any fat or sugar content and contain 10 grams of fiber per cup.

Elderberry may also be good for heart health.

Elderberry contains a high volume of flavonoids, which have been shown to significantly decrease the risk of cardiovascular disease (8).

Elderberries may help to reduce the amount of uric acid in the blood which is associated with hypertension and vascular changes. It may also help prevent cardiovascular disease and diabetes (9).

Another health benefit is the ability to protect the skin from the negative effects of UV radiation.

The polyphenols contained in elderberry may be useful as a supplement to sunscreen and could help with inflammation, DNA damage, and oxidative stress for those suffering from skin diseases (10).

=> REVEALED: The 12 Benefits of Goji Berries

Although there are many benefits to consuming elderberry and its extracts, there are also some drawbacks and potential health risks.

Eating uncooked berries, bark, leaves, and roots can cause gastrointestinal distress such as nausea, diarrhea, and vomiting.

The bark, leaves, and roots contain a cyanide-inducing glycoside that is toxic and can lead to cyanide poisoning.

Cooking the berries destroys the glycosides present in the seeds, making the berries with their seeds safe to eat. As such, the fruit of the black elderberry should always be cooked before consumption (11).

It is recommended to determine the plant as the more common American or European elderberry because other varieties may be more toxic.

Elderberry may also have a diuretic effect when consumed in large amounts or over a long period of time. This could be problematic for those taking diuretics or experiencing renal problems.

The potential to lower blood pressure means it could be harmful to those taking blood pressure medication. Diabetics should also be cautious because elderberry may stimulate glucose metabolism or promote insulin secretion (12).

There is insufficient data to determine if elderberry is safe to be used by women who are pregnant or lactating. More research is needed so it is recommended that it be avoided during pregnancy.

Scientific research has shown that elderberry for flu is real, and not just an old tale. It can help prevent and treat influenza, most notably by inhibiting the entry of the virus into cells and strengthening the immune system.

Some might class it as the worst kept secret, because while the information is readily available it is seldom promoted by government health agencies.

However, research is continuing and there is currently a study being set up to evaluate the safety and efficacy of elderberry in those with influenza. The study is currently recruiting participants and the results will not be available for some time (13).

There is also promising information indicating that elderberry may promote heart health and even decrease the risk of cardiovascular disease.

Research also indicates that the rich antioxidant content of elderberry may have anti-cancer effects.

The anti-inflammatory effects may also extend to other health conditions and have benefits beyond reducing the duration and severity of flu symptoms. Many studies already exist to show the positive effects of antioxidants at combating oxidative stress and repairing DNA damage.

=> You Can Buy Elderberry Extract Here