Goji berries have become popular as a superfood in recent years, so you’ve no doubt heard of them, tasted them or at least seen them in your local health food store.

But before we get into the history and nutritional value of goji berries, let's clear up the confusion between the goji and the wolf.

In Chinese (Mandarin), goji berries are called “gouqi.” Goji is a Western approximation of the pronunciation of gouqi.

The common English name, wolfberry, has unknown origin, though may have arisen from a mistaken assumption that the Latin name Lycium was derived from the Greek word, lycos, meaning “wolf”.

Goji berry, however, refers specifically to the Lycium chinense species of wolfberry grown in Tibet and Mongolia in remote unpolluted hills and valleys.

So although you may see goji berries in stores, this is a commercial catch-all term and it might be hard to determine which variety you are purchasing and where they were grown.

Still, the benefits of all varieties are closely linked. 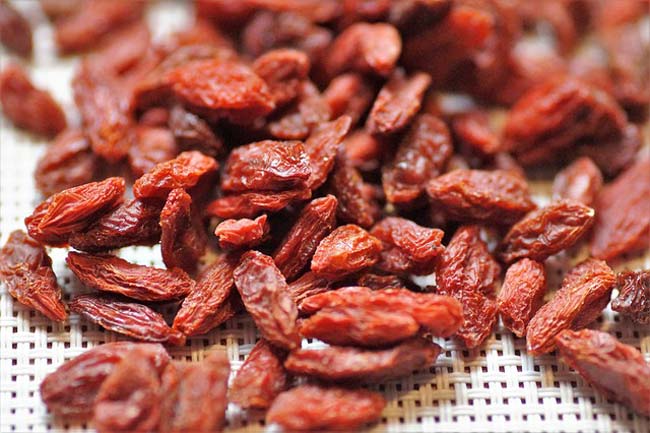 A Short History of the Goji Berry

Wolfberry has been used for over 2000 years in traditional Chinese medicine, with records showing its use as early as 200 BCE.

An ancient book on Chinese herbs lists wolfberry as one of the top grade herbs because it was thought to have amazing health benefits without harmful side effects.

Some of the purported medicinal or health uses of the wolfberry include:

In addition to the fruit, other parts of the wolfberry plant are also used medicinally, including the flower leaf, seed and root bark.

In addition to its medicinal properties, goji berries are also used in a variety of ways in Chinese cooking. Some common dishes to make with goji berries include:

Although goji berries have been used for a long time in China, they have only recently soared in popularity in the West.

Many health-conscious people have discovered the incredible nutritional benefits of this fruit.

Some of the vitamins, minerals, and other nutrients found in goji berries include:

They are also a good source of zeaxanthin, a carotenoid alcohol that gives the berry its color, which is also an antioxidant and is thought to improve eye health.

As a complex carbohydrate, eating goji berries will mean a slow rise in blood sugar instead of a spike followed by a crash.

Goji berries are also low in fat and calories with one ounce containing 23.2 calories. The calories are then broken down to include carbohydrates (9.2), fat (1.7), and protein (12.3).

Just like many other kinds of berries, gojis also contain polyphenols which are micronutrients that contain antioxidants.

Start your day with a heap of goji on your breakfast.

Goji berries have long been used in traditional medicine, but we now know for sure that the benefits are not just hearsay. Here's 12 big, scientifically proven benefits of the goji berry.

The antioxidants in goji berries are thought to help with eyesight while also protecting against free radicals which can harm the eyes.

A study done by researchers at Capital Medical University in China studied the effects on human retinal nerve cells.

They found that goji berry extract did have protective effects on the cells and was able to significantly promote the survival of retinal neurons. This lead them to conclude that goji extract could be used in the future to treat some retinal diseases (2).

Another study focused on the polysaccharides, an active component in the berries, to see if they could not only provide neuro-protection in the eyes but also delay the deterioration of vision in patients suffering from retinitis pigmentosa.

The results showed that a supplement of goji berries did have a neuro-protective effect on the retina and could delay or minimize degeneration in the eyes (3).

Elderly patients suffering from macular degeneration can also benefit from goji berries as one study showed an increase in plasma zeaxanthin levels. A daily supplement may be effective in preventing the progression of the disease (4).

A study of patients with type 2 diabetes found that goji berries had a protective effect and helped to decrease serum glucose while increasing high-density lipoprotein (5).

Ultraviolet radiation can damage the skin but goji berries may be able to help.

A study on mice who were exposed to UV radiation had a reduction in inflammation due to the consumption of goji berry juice. This lead researchers to believe that drinking the juice might be able to give photoprotection to humans as well (7).

One of the common uses in traditional Chinese medicine for goji berries was for liver health.

Recently studies have shown that extracts are effective at scavenging free radicals which can damage this organ. The berries also had other protective properties including anti-inflammatory activity and antioxidant effects (8).

Similarly, another study done in mice found that polysaccharides positively affected the quality of sperm by improving density and movement. An additional animal study found that testicle cells which were treated with polysaccharides and then cultured with hydrogen peroxide were protected against DNA oxidative damage (9, 10, 11).

The general effects of goji berries on health was studied by giving healthy adults goji berry juice for 14 days. Participants reported significant increases in their energy levels, the quality of their sleep, ability to focus, feelings of calmness, contentment, and happiness, as well as mental acuity. The researchers also concluded that gastrointestinal functions were improved and recommended further research on the positive effects of goji berries on health (12).

In a clinical trial, advanced cancer patients were treated with both a cancer drug and goji berry. The initial results showed that some patients had a regression of the cancer at a rate of 40.9% in the goji berry group while those who only had the cancer drug was at 16.1%

Those in the goji berry group also had a longer remission period, leading researchers to believe that berries could be useful when used in conjunction with other medications to treat cancer (13).

Goji berries have also been demonstrated to have neuroprotective effects to help combat neuronal loss in people with neurodegenerative diseases. There is evidence to indicate that consuming goji berries can have anti-aging effects too (14).

Several studies have started to look at the effects of goji berries on weight loss. One, in particular, found that it resulted in an increased metabolic rate. Participants in the study also found the circumference of their waist was also reduced by 5.5 cm or 2.16 inches.

Other research points to improved digestive function and increased energy levels which may contribute toward activities which may assist with a reduction in weight. However, more research needs to be conducted to see if it is truly an effective method of weight loss (15).

Others indicate that treatment with extracts can improve cardiac function in those receiving chemotherapy treatments. It has also been found that the extracts had similar antiatherosclerotic effects when compared to the drug lovastatin (16).

Researchers have found that there are multiple phenolic amides contained in the root bark of goji berry plants. When isolated, they were found to have antifungal effects and also obstructed the dimorphic transition of Candida (17).

Possible Side Effects of Goji Berries

Some people may be allergic to goji berries. If you experience swelling, itching, sneezing, or skin irritation then stop eating them.

It is possible for the consumption of goji to negatively interact with prescription drugs.

One of the most popular drugs that reacts with goji berries is Warfarin, an anticoagulant. Patients taking the drug have reported bleeding and bruising, so it is recommended to avoid goji berries if you are taking any kind of blood thinner.

Women who are pregnant should not eat goji berries because goji berries contain betaine, an organic nitrogenous substance, which can lead to uterine contractions and subsequent miscarriage. The high selenium content may also cause birth defects.

Lastly, goji berries are very high in vitamin A. One-fourth cup of goji berries provides 340 percent of your daily intake, so limit your intake to sensible levels to avoid vitamin A toxicity.