You are here: Home / Morality / Are Figs Vegan? The Truth About Wasps & Fig Tree Pollination

Figs are technically not a fruit because they don’t flower like apple and pear trees do. Instead, a fig tree's flowers bloom inside the pear-shaped pod, which matures into the fruit we eat.

The pollination of naturally growing fig trees is unique because it requires the help of a special wasp.

Now, you've probably seen headlines like “figs aren't vegan because they're full of dead wasps”. But this isn't true. And in this post I'll explain why. 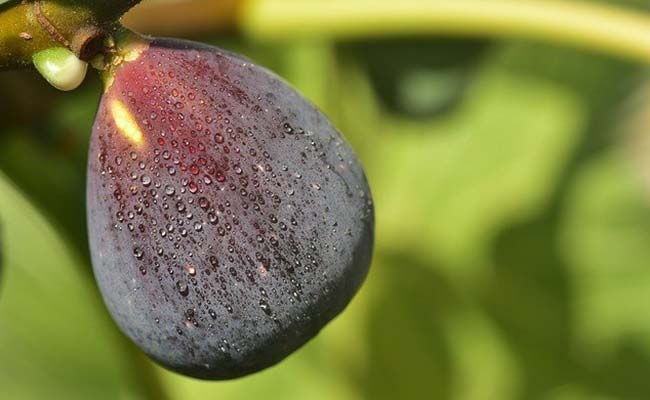 Some types of fig tree require the help of a special breed of wasp – a fig wasp – to pollinate the flowers (1).

I say some, because most of the figs you buy are commercially grown and don't make use of the natural pollination process. They are self-pollinating.

This process of pollination is beneficial to both wasp and fig, and here's why.

The fig wasp crawls inside the male fig through a narrow hole called an ostiole. Male figs are inedible and called caprifigs.

During  the process, the fig wasp loses her wings and becomes trapped.

If the fig is male, she is able to lay her eggs (up to a few hundred) inside due to the design of the fig. Along the way, she also drops pollen into some of the flowers, which go on to produce seeds.

The eggs she lays hatch into larvae. The males mate with the females and burrow a tunnel in the fruit for the females to leave. The males never make it out though, and die inside. The female wasps escape and fly off carrying pollen with them. And so the cycle continues.

Note that the female fig wasp doesn't know if she's entering a male or female fig. So if she accidentally crawls inside a female fig, she pollinates it but cannot lay her eggs there and just dies.

Don't be sad, though. It was meant to be this way. Fig wasps have a maximum life span of just two months. This ensures that the fig trees produce fruit all year round.

In rainforests, many birds and animals depend on figs for food, meaning that these awesome wasps are supporting a huge ecosystem.

Do Figs Contain the Body Parts of Wasps?

No. The fig produces an enzyme, called ficin, that digests the female wasp completely. So those are seeds you see in a fig, not body parts.

The truth is, by the time you eat the fig, there's no visible trace of the wasp (unless you're unlucky). Its proteins have been broken down and absorbed into the fig.

In fact ficin is so effective at breaking down animal proteins that in Central America fig sap is used to treat intestinal worm infections.

Yes, of course. This pollination process is an intricate design of nature based on mutual needs that has developed over millions of years. It's known as mutualism.

Over the millennia, both members have adapted to the other: for instance, wasps and seeds take a similar amount of time to develop (2).

The life cycle of the fig wasp revolves completely around the fig tree it inhabits.

Within the colony of wasps that inhabit a tree, there are two groups of wasp; pollinating and non-pollinating.

What's interesting is that so many people spend their time trying to prove that vegans aren't actually as vegan as they think, implying that a vegan's goal of living a lifestyle that seeks to reduce harm as much as possible is a waste of time.

I wrote about this in my all or nothing fallacy post.

There is a symbiotic relationship between all plants and insects. Insects die on vegetable plants and fruit trees every single day.

Anyone who grows their own vegetables knows how common it is to find insects, both dead and alive, in a crop. And if you eat organic or veganic, no doubt you accidentally consume many insects each year.

Indeed, if you pick and eat apples and pears straight from the tree, or berries from the bush, you've probably eaten more than a handful of bugs in your lifetime.

The reason we rarely find insects in commercially-grown produce is because it is grown with pesticides and chemically-sanitized before it reaches our kitchens.

The notion that figs aren't vegan because wasps die in the pollination process is silly. In fact, this process actually gives life because the female wasp lays her eggs in this safe pod, which then hatch start the cycle over again.

It's preposterous that this nature-designed process can be compared with eating animal products that involve drowning pigs in scalding hot water, or stringing a cow up and slitting its throat, or throwing male chicks into a grinder.

There is no comparison. One is a harmonious process designed by nature and the others all unnecessary evils.

As a Vegan, Should I Eat Figs?

Yes, absolutely. Relationships between plants and insects are found everywhere in nature. Insects crawl on and inside plants all the time.

Veganism is about living life with the intention of causing as little harm as possible. You'd be causing far more harm not eating figs than if you decided to live under a fig tree and stop female wasps crawling inside the fruit.