Bees make honey. It's actually the vomit of thousands of bees, because one bee will only make one twelfth of a teaspoon of honey its entire life.

Therefore, vegans don't eat honey, because it is an animal product.

Now, maybe you're already thinking, “I get the whole not eating meat, but honey? Come on, it’s a natural by-product, and they’re just insects.”

We have this cultural impression that bees just do their thing and the beekeeper does them a favor by providing a nice beehive. And all he asks in exchange is a little honey, right?

But there is far more to it than that, and some good reasons why vegans avoid honey.

Commercial beekeeping is cruel. And here's why. 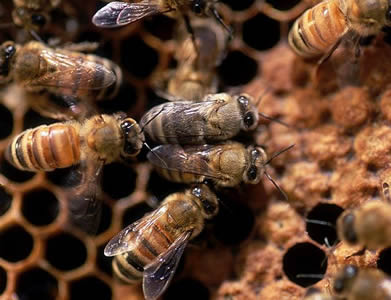 The trade that we like to see in our minds of happy bees churning out honey for our table is actually the result of a systemic regime of torture, mutilation, theft and rape.

We have to understand that the selective breeding of animals, including artificial insemination, is unethical and cruel when it’s done to profit humans.

I totally get that for some cases, like preserving endangered species because we’ve killed most of them, artificial insemination is necessary to prevent extinction.

We humans associate rape with human to human abuse. But the reality is that the rape of animals such as dogs and horses is illegal in most countries, although raping cows is allowed to support milk farming.

The sentience of bees is open to debate, but the fact is, most people would agree that it is wrong to forcibly interfere with the sexual organs of any animal. It's very strange to actually want to do that unnecessarily.

So how does this apply to bees?

In a natural bee colony, the hierarchical cycle works like this:

The queen bee knows when her time is up, so she prepares the next generation of queen eggs.

Then the old queen is killed by the workers, or is driven off when she is spent.

The workers raise the new queens, who fight for dominance until there is only one – like in Highlander, but with bees.

This queen will fly off to mate with drones and return to the hive when fully mated, ready to lay eggs.

You don’t need to be an expert on Darwinism to see the advantages for the bee colony in this system: the strong survive, the powerful drones mate the queen, the hive gets a broad genetic base.

In industrial honey production, a queen is selected for impregnation. Semen is then forcibly extracted from drones and she is inseminated.

The vast majority of drones die unmated, and it is the strongest or the luckiest who impregnate the queen. It’s intrinsically unnatural to interfere with the process in this way.

It would be unnatural to remove your sexual agency in selecting a partner to make babies with based on how convenient it would be for a third party, right?

This process isn't even for the purpose of selective breeding, as it is with other animals – like how we have domesticated and altered dogs to suit our needs and desires.

Genetic strength is generally not a factor when inseminating queen bees, only that the queen's eggs are fertilized.

In many nations, this aberration occurs annually, whereas in the wild a queen may live for five years, providing stability and security for her hive.

A farmed queen has a single year to breed before an untimely death, with only a weakened genetic line following her for all her efforts.

2. Queens have their wings cut off (clipped)

When a queen is selected, her wings are clipped so that she can’t leave the hive, which stops other bees leaving with her.

This leaves the queen distressed, as she can't follow her natural instinct. Imagine a dog without its walks.

The wings are literally cut off, about 1/3 from the top.

This is very common, and almost always encouraged as a way to successfully manage a hive.

Does a bee feel emotion to the same level of consciousness that humans do? No, of course not, they are insects.

However, a bee has a nervous system that is used for communication through motion and sight, location of food, and yes, includes the ability to feel pain.

So when a hive is smoked (this encourages feeding behavior, as the bees think the hive is on fire), or wings are clipped, the bees feel pain and distress.

It is worth noting that bees communicate through intricate dance moves, which humans are still yet to understand.

Consider also that we humans incinerate wild hives, for no reason other than our own convenience; even when swarms and beehives can be removed by experienced beekeepers without harming the bees.

4. To steal honey, we must replace it with an inferior food source

Honey is bee food. It is not simply a by-product that they don't need.

Bees play an essential role in maintaining life on our planet by pollinating the food we need to survive and many of the trees and flowers that provide habitats for wildlife.

They need honey to give them the energy to do this.

So, to get our hands on the honey, honey producers replace the honey with a sugar solution that gives the bees energy to collect more pollen and make more nectar.

This solution lacks the antioxidants and nutrients they need to maintain health, leaving the hive susceptible to disease. And if the hive does become diseased then the bees will be culled. Hardly fair, considering the poor health is down to human interference.

Another problem is that during winter when bees wouldn't usually be making honey, they still need the sugar solution for food. But they are not producing honey, which means they have all this energy but no output for it, which causes distress.

No honey, no money for the beekeepers, which in the commercial mass farming world results in the hive being culled.

5. We're poisoning honeybees and ourselves for profit

In Europe, the sugar fed to bees to replace the honey humans steal contains Oxytetracycline or Terramycin.

These are antibiotics used to prevent diseases in the hive, which are then passed into the honey we consume.

We often see headlines regarding the decline of bees, but seldom does anyone mention that, like humans, bee health may be adversely affected by the use of antibiotics.

As we discuss in our article Meat & Antibiotics, the use of drugs in this way is nothing short of reprehensible.

Pesticides also annihilate the very creatures we depend on to pollinate our crops. For example, in the Piedmont region of Italy in 2009, 30,000 colonies of bees were destroyed by pesticides (1).

Coupled with the genetic modification of crops, which causes alteration in the bacteria that live in the bee – which also get passed on to us – and we see a chain of human meddling that is entirely to the detriment of the organisms in the food chain.

6. Monoculture is a threat to the existence of honeybees

Industrial agriculture, like all plant interests, relies on bees for pollination. This has been the interconnected journey between our species since we gave up the hunter/gatherer lifestyle several millennia ago.

We humans have decided in our arrogance to ignore nature and create huge swathes of land that are devoid of the broad range of plant species that insects and mammals depend on.

We strip out the biosphere in an area, and replace it with a single plant cash crop.

For example, almonds in California occupy a million acres of land. In addition to the vast quantities of water required to produce the crop, the land is more hostile to bees than a city block. Bees need a variety of plants to pollinate, so they have been driven from the wild where almonds are grown.

Imagine a million acres, and no bees. Every year millions of bees are transported in for pollination duties, causing countless deaths and massive stress to hives.

Whereas we once honored hives and protected them, considered their honey as a literal gift from the gods, now we have enslaved them for work in conditions that are anathema to their existence.

Could organic beekeeping make amends for our shameful crimes against honeybees?

Despite the above criticisms of beekeeping, there are organizations who say they respect bees and the role they play in our continued existence.

It is claimed that with organic beekeeping, there is a movement towards bee-husbandry and away from bee exploitation.

This remains to be seen. Bees belong in the wild, and from a ethical perspective we should just leave them alone.

Honey can't be produced without harming bees and their environment. The ethical consideration of keeping captive bees far outweighs any requirement we have for honey. We just don't need it.

What About ‘Balanced Beekeeping?

There is what's known as ‘balanced beekeeping', were keepers take care of hives purely for the love, not for the honey.

The honey is only eaten if it is surplus, if the hive has moved on and the honey would otherwise go to waste.

These keepers just love the species and don't expect anything in return. Any spare honey is a bonus.

One can't argue with that.

That said, some humans have a track record of being given an inch and taking a mile, or more, and eating leftover honey may soon lead to “just a little bit more”.

If you want to sweeten your cereal or soothe a sore throat, use date nectar, molasses, or coconut nectar.

In fact the healthiest sweetener is date syrup (2).

There are plenty of plant-based alternatives that don't involve bee vomit.

One third of the human diet comes from plants that are pollinated by bees, including much of what is fed to cattle, like alfalfa.

If the bees go, humanity as a species is in trouble.

This is a fate we have wrought upon ourselves through the arrogant belief that somehow a young, technologically advanced species knows more about managing ecosystems than nature itself.

The hubris is staggering in both scale and impact. Like in the myths of the ancient Greeks who gave us the word, hubris will be the cause of our woe and destruction.

The collapse of global ecosystems is a sadly common story in the modern age, and again and again we see the same root cause – human exploitation for short-term benefit.

We are responsible for the survival of this world. So rather than simply saying, “Oh, it's only honey”, we need to understand the impact that farming honey has on bees and their environment.

What we should be asking instead is: what can I do to help the species that allows my civilization to exist?