You are here: Home / Fitness / REVEALED: The Diet of Kenyan Runners – The Greatest Distance Athletes in the World

It seems like every day we hear about another top athlete turning to a plant-based diet to improve their performance.

Why? In a nutshell: faster recovery from injury, lower levels of inflammation, higher energy levels and better sleep and overall recovery.

Thing is, while this seems like a relatively new trend, the West has been very slow to catch on to the benefits of a plant-based (or at least predominately) diet; something that has been a staple of society in many parts of the world for centuries.

We have ignored/been misled over the consensus scientific literature for decades and continue to push high animal protein diets, even though they are associated with inflammation and disease.

If we look around the world, the longest living societies, with the lowest rates of disease (heart disease, type II diabetes, rheumatoid arthritis, autoimmune diseases, etc.,) all have one thing in common: a primarily plant-based diet.

The above list of athletes includes tennis stars, football players, a racing driver and an MMA fighter.

But what about distance runners?

What about those amazing Kenyan distance runners? 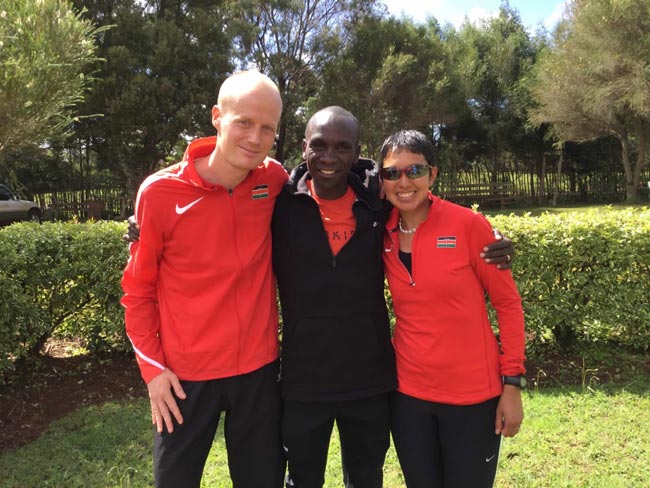 My brother and his wife with Eliud at the training camp.

If distance runners are looking for a way to improve endurance and performance, they need only look to the Kenyan runners.

If you follow athletics or have ever watched a marathon, you'll know that the Kenyans are by far the best long distance runners in the world: See Mary Keitany (36) and Eliud Kipchoge (34 – reported to be older) for reference. 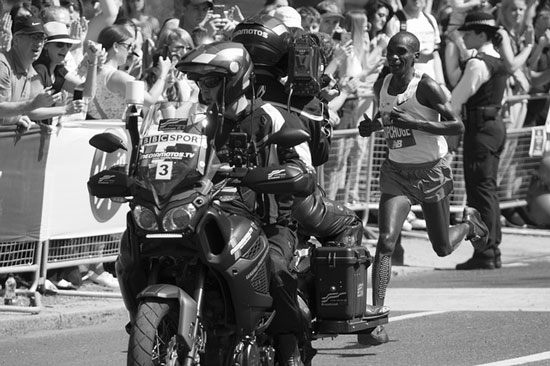 Eliud Kipchoge running the London Marathon. He has been described as “the greatest marathoner of the modern era.

The diet of the Kenyan runners became of interest to me when my brother began attending a Kenyan training camp where the top Kenyan runners, including Kipchoge train.

He, along with his wife, is a keen runner and participates in races from 5k's to full marathons.

Since finding distance running in his late 30s, he has graduated towards a  primarily plant-based diet, cutting out lots of processed foods and lowering his meat and dairy intake; though he is not fully plant-based.

Because of my interest in the power of plant foods, he was keen to explain to me exactly what they had eaten at the training camp, along with the Kenyan runners that stay there.

Interestingly, though, the diet isn't solely designed for the Kenyan runners themselves. No, this, he explained, is the staple Kenyan diet.

Of course, the average person may diversify from this, but there are specific staples throughout society that haven't changed for centuries.

In the same way that much of  SE Asia has existed on a rice (starch) based diet for centuries, the Kenyans have existed on a primarily starch-based diet too.

To digress a little: we tend to associate protein with power and energy – largely because this is drilled into us in school, in gyms and through product marketing. 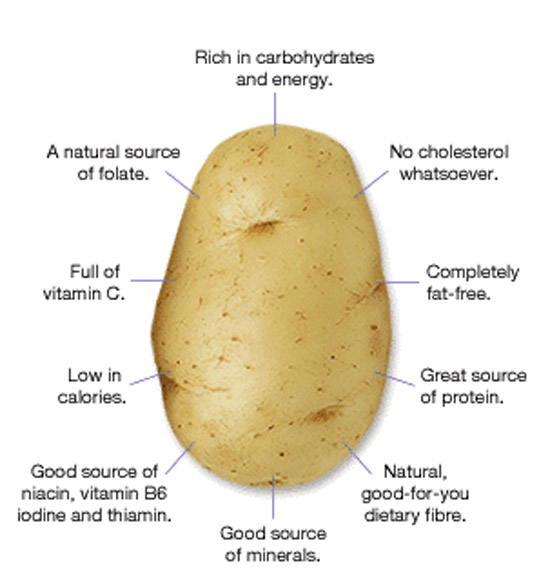 How dare people speak badly of potatoes! This is one awesome food source.

Because of the prevalence of simple, processed carbohydrates, carbohydrates have been given a bad name – thus the low-carb diet fads that promote high levels of protein.

I don't want to get into that debate in this post, but just as a quick example: take the Okinawans, one of the longest living societies (one of the Blue Zones) – with over 400 centenarians – They live almost exclusively on starch. Sweet potatoes make up 75%+ of their diet.

Look at  the Tarahumara, known as “the running people”: a Mexican tribe of super-athletes who run 50 or 100 miles at a time for pure enjoyment and with little effort.

Their diet? Starch. It's based on corn and chia seeds. They also like corn beer,  but that's another story…

Incidentally, they have no recorded incidence of heart disease or diabetes.

But their life expectancy is low. They live in harsh conditions and many succumb to tuberculosis, hypothermia, malnutrition and cold-related diseases caused by cold winters. But boy can they run… 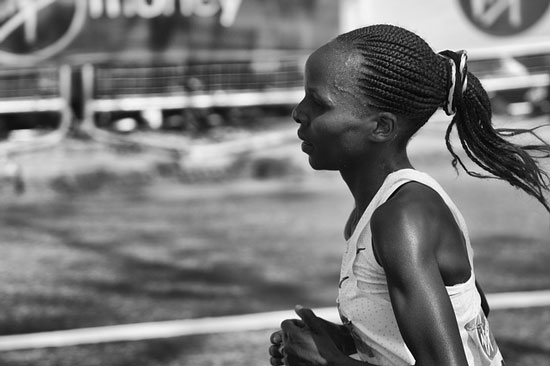 Mary Keitany is the world record holder in a women-only marathon, having won the 2017 London Marathon in a time of 2:17:01. Her half marathon personal best of 1:05:50 is a former women's world record.

What Do Kenyan Runners Eat?

Kenyan marathon runners are known for their winning longevity, with many runners still smashing records well into their mid and late thirties.

A typical Kenyan meal consists of the following:

This is the same diet that turned Mo Farah into a world champion.

They cooked simple, home-grown foods in these massive pots, typical Kenyan staples like ugali, a maize flour mix rolled into a doughy lump. This was new to me. Kenyan runners swear by ugali ~ Mo Farah

All this food is homemade.

Genetics and lifestyle clearly play a role, too.

Kenyans generally appear light and lean in stature; a good foundation for a distance runner.

But maintaining this is a result of diet. Genetics alone will not keep you slim.

We know this from research studies on immigrants from Asia and Africa who have adopted a Western diet. The problem is they also adopt the same diseases and obesity risk as the native population.[2][3]

Unwittingly, training to be a good runner starts young in Kenya.

The nature of rural life means lots of walking.

Kids are often required to walk long distances to school, and families may have to walk miles to buy food and collect fresh water. Few families have cars in rural Kenya, so walking or running is the quickest way to get around.

Like Asia, many people work in manual labour, in a hot climate. Life requires a lot of energy. The diet they eat supports this, but it also supports good health.

Starchy foods are a good source of energy and the main source of a range of nutrients in our diet. As well as starch, they contain fibre, calcium, iron and B vitamins.

Some people think starchy foods are fattening, but gram for gram they contain fewer than half the calories of fat.[4]

Of course, Dr. McDougall has been telling everyone this for over 40 years; and to date no one has proved him wrong.

The story is the same the world over. Whether rice in Asia, potatoes in South America,  corn in Central America,  wheat in Europe, starch has been at the centre of food and nutrition throughout human history. [5]

I have increased my potato (sweet and standard) intake over the last month and seen a noticeable improvement in recovery from my runs.

Perhaps the biggest improvement though is in energy reserves. I have found that I am able to increase my pace at different points in my run, without burning out.

So I'll suddenly be able to increase my pace for half a kilometre or more, and then slow down again, and repeat this at various intersections of my trail.

Starch for the win. Literally.

If you want to  learn more about the science of starch and how it contributes to health and longevity,  I strongly recommend reading The Starch Solution.