You are here: Home / Lifestyle / A Guide to Seitan: The Protein Packed Meat Alternative

It's certainly a strange name for a food but the devil is in the detail, pardon the pun.

So what is seitan? And is it healthy? Moreover, how do you make it?

Seitan is a vegetarian and vegan meat-alternative made from wheat.

It has a texture similar to animal protein and is often used in meatless products such as sausages, deli slices, and faux bacon.

Common vegan protein options like tofu and tempeh are soy-based and may be unsuitable for those sensitive to soy products, so seitan makes for a great alternative. 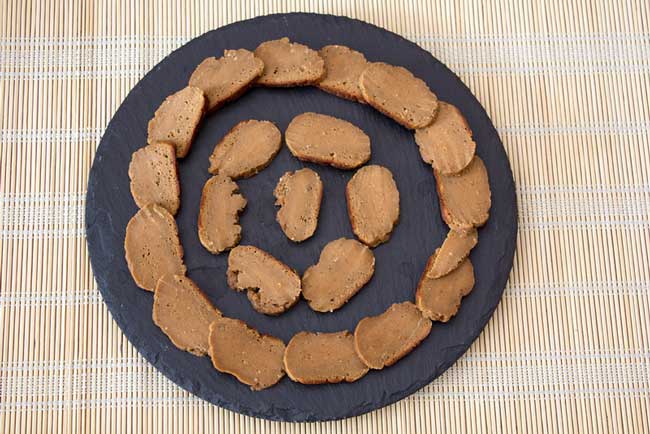 Seitan is quite low in calories, fat, and carbohydrates. A half-cup serving yields just 240 calories and only 1 gram of fat, and no saturated fat.

The same serving contains just 8 grams of carbohydrates, which makes it a relatively low-carb food.

Seitan is a healthier replacement for animal protein because it is very high in protein. Even compared to both soft and firm tofu (in large portion sizes), seitan is much higher in protein.

Half a cup of seitan contains 46 grams of protein, making the perfect companion for those looking to increase protein intake.

Plain seitan is also naturally free of sugar and sodium, but some people like to flavor it with additional spices and may add sugar to sweeten it up.

One thing to note is that seitan is quite low in fiber, with a half-cup containing just 2 grams. You may want to add fibrous vegetables to a meal containing seitan to aid digestion.

Although seitan contains a lot of protein and other nutrients, it is still considered a processed food – albeit one on the healthier end of the spectrum.

So those who already eat a diet high in processed foods may want to limit their intake, while people who consume a primarily whole foods, plant-based diet can probably eat seitan without too much concern.

Seitan contains approximately the same amount of protein as animal flesh and is a good source of a number of minerals. It is low in carbohydrates and fats.

Seitan is made from vital wheat gluten, which is the gluten left behind when the starch in wheat has been washed away.

Some studies have found that gluten can be harmful to the gut and it may increase intestinal permeability, also called leaky gut (2, 3).

However, some studies have not been able to replicate the same results so more research is needed (4, 5).

If you find yourself experiencing side effects or gastrointestinal distress after eating seitan or other gluten-based foods, try eliminating them from your diet to see if the symptoms disappear.

You may also need to contact a doctor or nutritionist to see if you have a gluten sensitivity, in which case you should avoid products like seitan.

Seitan must be avoided by anyone with a wheat or gluten intolerance.

The taste of seitan is savory and quite mild. Some compare the taste to portobello mushrooms or chicken, which don’t have distinctive flavors.

Many types of seitan are flavored with spices and savory sauces. The seitan soaks up these ingredients and takes on the flavor.

Its neutral flavor and dense, meaty texture make it ideal for meatless recipes such as seitan “chicken wings”, which can be cooked in hot sauce for a traditional taste.

Additionally, seitan is great in sandwiches/baguettes, and acts like a slice of ham, turkey or chicken.

Layer some lettuce, vegan mayo, avocado and tomatoes on top and you have yourself a filling lunch. 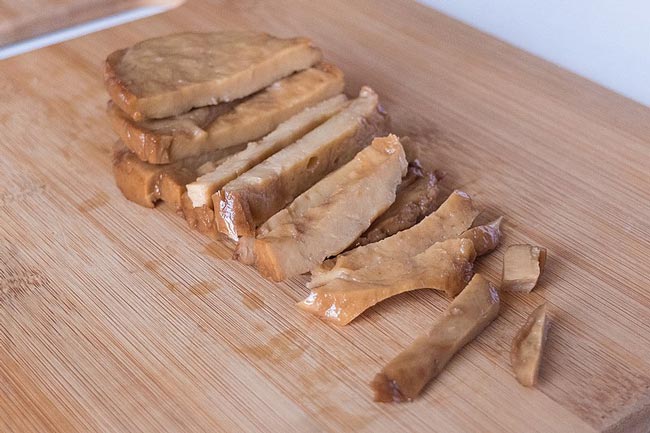 Depending on how it's prepared, seitan can look a lot like chicken or turkey.

How to Cook Seitan

Seitan can be purchased from the store readymade and in a variety of flavors.

It often comes as a solid, long chunk, which can be chopped into pieces, sliced thin, or cut to imitate the shape of bacon.

When buying pre-made seitan, be cautious of the sodium content, which is often added to extend the shelf-life.

Read the ingredients to see what flavorings have been used and the level of sugar content, if you are concerned about that. Sulphites may also be added to prevent discoloration.

Those who want to make their own seitan can easily do so at home. All you need to buy is vital wheat gluten and then decide on which spices you'd like to add.

The ingredients used depend on what kind of seitan you want to make or meat you are trying to imitate. Seitan can easily take on the flavors of chicken and beef based on how you season it.

Some seasonings and ingredients commonly used when making seitan include:

Some flavor combinations will work better than others, so experiment and try different things to find a niche.

Recipes are widely available online and can guide you toward specific flavors and the amounts required to get the taste just right.

Seitan is a vegan meat substitute created by rinsing wheat dough to remove the the starch. What's left is a dense mass of pure gluten protein that can be seasoned, rolled and cooked. 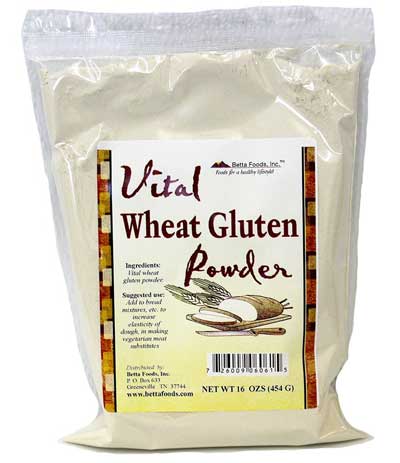 Ideas for Using Seitan in Your Cooking

Seitan is delicious in vegetable curries such as Thai curry, or in a stir fry with rice and vegetables – similar to doing the same with tofu.

Seitan can even be grilled or barbecued, and in this way is similar to the Greek cheese Haloumi.

An entire loaf of seitan can be cooked like a roast or steak and is delicious when stuffed. This provides a vegan/vegetarian option for Thanksgiving.

Sliced seitan makes a great pepperoni replacement on a pizza, and small pieces of seitan formed into meatballs can be tossed into pasta.

Grind it up to use in place of ground beef for tacos, or slice it into strips for fajitas.

When breaded, you can fry seitan to make a fried chicken alternative. It can even be put on skewers along with vegetables or fruits and dipped in peanut sauce like satay.

Thinly sliced seitan mimics deli meats and can be eaten on sandwiches or subs. When dehydrated, you can make seitan jerky for an on-the-go snack. 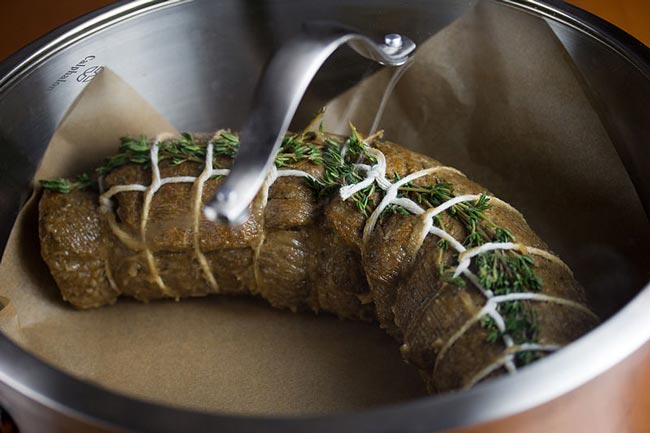 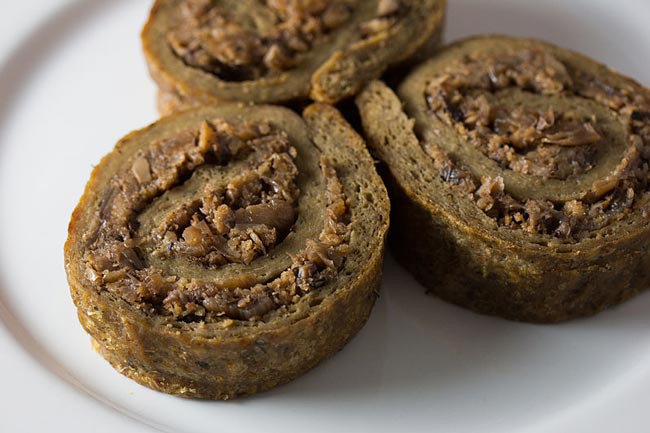 Often confused, tempeh is similar to seitan and also eaten as a meat substitute. However, tempeh is made from fermented cooked soybeans and has a mild, nutty flavor that can be modified by adding sauces, condiments, or seasonings.

The fermentation process breaks down some of the acids in the beans and makes them easier to digest – less wind!

Unlike seitan, tempeh does not contain gluten and can also be used in place of meat in almost any dish. If you don't get on with gluten, swap seitan for tempeh and use the recipe ideas in this article in the same way.

Where to Buy Seitan

Most grocery stores now have a refrigerated section with vegetarian and vegan foods such as tofu. Although seitan is not as popular as tofu, you should be able to find it in major stores.

You may also find it at health food stores, Asian supermarkets and other places that carry specialty grocery items. It is often in the refrigerated area, sealed in plastic and placed in a box.

Most stores that carry seitan usually have the plain variety, though some carry a few flavored varieties.

In the US you can buy it at Berkeley Bowl, Whole Foods, Trader Joe's and, if you live in Oakland, the Mandela Food Co-op. Some Safeways stock it too.

Vital wheat gluten can be purchased in many stores either in bulk or in the baking or flour section. If you can’t find it at a nearby store, try looking online on Amazon.

How to Store Seitan

Seitan can be kept in the refrigerator at home for several days without spoiling, but does have a shelf-life so check before you buy.

Some pre-packaged seitan does not reseal easily after opening so make sure you put it in a new container so it stays fresh for longer.

You can also freeze seitan for up to three months and thaw it out to use in recipes on an as-needed basis.

If you make your own seitan, let it cool down first before putting it in the refrigerator or freezer.