You are here: Home / Lifestyle / Why Vegans Should Eat at Meat-Serving Restaurants & Shop at Non-Vegan Stores

As a vegan, I naturally have a tendency to get het up about animal welfare. What can I say; I love animals.

Over the years (prior to going vegan) I had donated to dog shelters and other animal charities, continually cursed the cosmetics industry for animal testing, detested zoos for their unethical imprisonment of animals, and shed tears watching news reports like that of the annual Taiji dolphin slaughter.

I always felt like I really cared. And I did. But I was a fully-fledged hypocrite.

Because I was still chomping down on a chicken breast for dinner, still making a protein shake after the gym, still eating a burger n’ chips out with the lads, and still wolfing down eggs at breakfast like they were going out of fashion.

Yea, Peter, you sure gave a crap about animal welfare, munching down all that suffering.

But after a series of karmic events, which I’ll leave for another post, I stopped turning a blind eye. I actually began to watch those sickening videos that vegans share on Facebook; you know, videos that show live chicks being put in a blender, tails and teeth being pulled off piglets without anaesthetic, calves having their bodies slit open…that sort of thing.

Oh my, if only slaughterhouses had windows. Of course, there’s a reason they don’t.

I began to do my own investigation in to so-called “ethical” meat and dairy, and guess what? It turns out there’s no such thing.

So, I was forced to look in the mirror and ask myself, do you really love animals? Furthermore, are you against slavery, torture and murder?

I bowed my head in shame, and never looked back.

So naturally you’d be forgiven for thinking that I was someone who wanted to stay as far away from meat as possible, someone that wouldn’t eat in a restaurant that served meat, someone who would boycott any environment where meat was sold or served.

But you’d be wrong. Some vegans do, but I’m firmly against such a boycott. And here’s why…

Because it’s exactly this act of hiding from the truth that stopped me going vegan years before I did. Sugarcoating the torture of some animals while pretending to care about others had become a terrible habit: I would stroke my dog and then eat some chicken, convincing myself that the happy looking chicken on the label with the word “organic” next to it made it somehow okay.

But this wasn’t entirely my fault. We’re raised to be specist through strategic marketing, to value the lives of some species over others. Don’t eat dogs and cats, they’re cute, but pigs and cows, they're stupid, you can eat them. And just look at the adverts. The animals are happy, right? They love being a human food source.

But what this marketing machine hides from us is the slavery, the torture and the murder.

The reality is that supermarkets deal in murder, and restaurants serve murder. Don’t allow yourself to sugarcoat this reality in any way.

Labeling this cruel industry correctly is a big part of not hiding away from the truth. Farmed meat and dairy products are derived from an act of enslavement, torture and murder. Over150 billion animals a year meet their fate this way. So why not call it what it is?

When you face the reality of the slaughterhouse, when you can watch the murder and process of how your meat is made in the flesh (pardon the pun), and when you can bring yourself to admit the truth that there is absolutely no difference in murdering a human and murdering a cow, then you are one step closer to stopping the trail of hypocrisy.

And it’s for this reason that, as long as there’s a vegan option, even if just a jacket potato with carrots on the side, I will continue to eat at restaurants that serve meat. I want to show others that I’m vegan and proud. I want to make the point that the more vegan food on the menu, the more I’ll keep coming back. And hey, who knows, maybe the owner will see that ‘vegan’ is a big niche and end up opening a vegan restaurant. 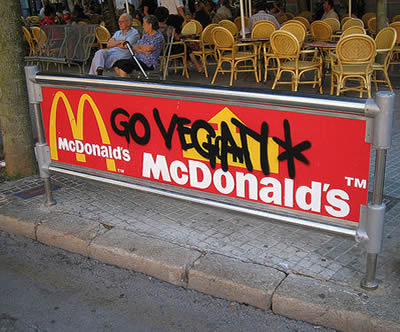 I can’t have an impact on others who are in the same mental place I was before I went vegan by only talking with vegans, eating at vegan restaurants and buying from vegan stores. I need to be in the thick of it, where people will ask that crucial question, “Why don’t you eat meat?”

If I truly love animals like I love humans, then I’ll defend them in the same way. I won’t hide away eating vegan meals in my room. I will roll up in my local burger joint and order the vegan burger in my VeganMotivation.com t-shirt (coming soon).

I’m then going to tell the manager that my vegan friends would eat here too if they had more vegan options. I’m then going to make friends with the staff and, when they ask why I’m vegan, I’m going to explain and hopefully inspire them to try it too.

It’s not hypocritical to be a vegan and eat at a restaurant that serves meat, or to shop where meat is sold. It’s hypocritical not to go to these places and stand up for what you know is right; to represent the animals and spread the necessary love and positivity needed to create a more compassionate world.

Like it or not, we are a movement, a progressive one at that; one that is leading the good fight towards a world with less torture and murder, one where all sentient beings can enjoy their earth-given right to life. We must get out there and show others what we stand for.

I’m not saying you should go into McDonald’s and start preaching or handing out leaflets with slaughterhouse pictures while people are eating, I’m simply saying that you shouldn’t withdraw from society, label everyone a bad person and avoid places where meat is served or sold.

Change will never happen if you don’t stand tall in the places where you are challenged by adversity.

The reality is that the vast majority of meat eaters I encounter are in exactly the same denial I was before going vegan.

They can’t watch the videos, they can’t listen to the descriptions of animals being mistreated – they can’t face the truth. Moreover, 90% of them avoid eating animal organs such as tongue, liver or kidney, why? Because those parts provoke real-life images of a real animal in their minds…

…Doesn’t this tell you something? If eating meat comes so naturally to world, why do we have to sugarcoat its consumption?

Why, when we eat meat, do we have to distance ourselves from the animal, the life, the being? I don’t see a lion turning his nose up at the brain of a zebra, complaining that he’d rather have some breast. So it’s important that we are present to discuss such issues and raise these points.

To create change, you have to be seen and heard. You’re not supporting animal suffering by avoiding eating at non-vegan restaurants or shopping at non-vegan store. In fact, trying to do that is likely to make you very frustrated and disappointed because it’s very difficult to maintain consistency. How are you going to find a vegan gas station that doesn’t stock milk chocolate bars or sell ham sandwiches?

It’s impossible to avoid the meat-eating world, and we won’t change restaurants, stores or the big corporations who supply them by hiding away.

Think about it like this: if you influence one restaurant to start selling a vegan option, that’s a huge win. If you repeatedly ask for a particular vegan product in your local grocery store and they end up stocking it, that’s an important step towards a vegan world.

So if someone accuses you of being a hypocrite for eating in a meat-serving restaurant, or for buying your tofu from a store that sells meat, flip them the V sign. V for “vegan”, that is.