You are here: Home / Pet Ownership / The Ethics of Being Vegan and Owning a Dog

Dog ownership is a contentious issue that is rarely spoken about in the vegan community, and surprisingly not often used as ammo by those seeking to criticize this non-violent lifestyle.

Perhaps it is because so many vegans own dogs that few choose to address the issue, but it really is deserving of debate, as there are a number of issues that are at odds with veganism.

In this article I look at vegan dog ownership from the hypocrisy surrounding diet, commodification (exploitation) and dominion.

The Ethics of Vegan Dog Ownership – Is It Hypocritical? 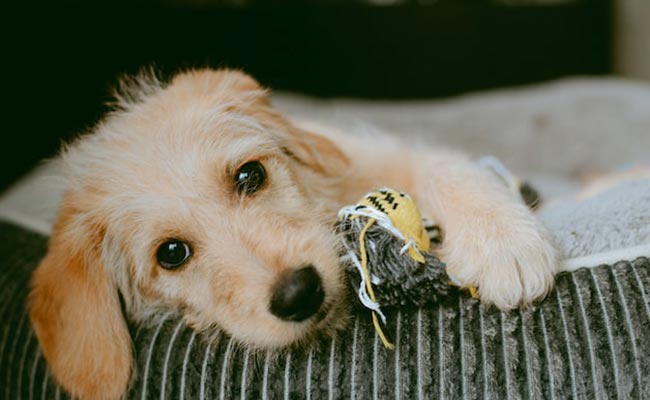 At the core of veganism is to eschew the consumption of flesh and secretions of animals. Vegans abhor the animal agriculture system and do their best to avoid supporting it in any way.

Surprisingly, however, many vegans own dogs and feed them meat and fish-based products. This cannot be considered a vegan practice. Even if one were to argue that a dog required meat on the grounds of nutrition, how can it be ethical to raise and kill multiple animals to keep one animal alive.

Surely the more ethical thing to do would be to put one dog down and save the lives of multiple other animals?

Some vegans do feed their dogs plant-based dog food. Unlike cats, which are obligate carnivores, dogs are genuine omnivores. Most breeds will thrive on a complete vegan kibble.

The science supports this practice, as long as the food meets the amino acid requirements for important aminos like taurine and carnitine. In fact, a recent study of 2,639 dogs and their owners, led by the University of Winchester, explored how health outcomes vary between dogs fed meat-based or vegan diets, and found that a vegan diet may be the healthiest option for dogs (1).

However, there may be some dogs that don't take to a plant-based diet, particularly those dogs that have eaten a meat-based diet for a number of years.

It isn't uncommon for a dog to take badly to a particular brand of food, meat-based or otherwise. It often takes trial and error, along with the advice of a veterinarian, to find a good nutritional plan for a dog with a sensitive stomach. In such a situation, would it be ethical for the vegan owner to feed the dog a meat/fish-based diet?

One can make the argument that the dog ownership industry is incredibly exploitative. The relationship is one in which humans have dominion over dogs and dictate their lives. Dogs are purchased, like commodities, and bred to look a certain way with certain characteristics to please the desires of human beings.

This is often to the detriment of the animal's health. Consider that English Bulldogs often develop health problems as a result of their short snouts and the shape of their skull, which make them prone to severe respiratory problems. Cavalier King Charles spaniels are prone to heart conditions, eye problems such as cataracts and dry eye syndrome, and joint problems as a result of selective breeding.

People usually buy dogs for companionship, affection, security, or fun. As such, a large percentage of dog-owner relationships are very one-sided. Too many dogs lack adequate exercise, socialization, discipline and proper nutrition. This causes unhealthy, unruly, insecure animals, and has wider implications for society, including the dangers of dog attacks and fouling in public places.

The dog industry is a huge money-spinner, not just for breeders but also for the producers of beds, toys, leads, coats, food, treats, etc. The fact is; the commodification of any animal always leads to exploitation. This is a point voiced by vegans when faced with the ethics of raising back-yard hens but rarely discuss when it comes to dogs as companion animals.

We can't have it both ways.

Some would argue that dog rescue is entirely different to buying a dog from a breeder. It is certainly more ethical than buying from a puppy mill or pet shop.

A shelter dog is unwanted and needs a home. The dog didn't ask to be born, nor abandoned. I think most of us would agree that adopting an unwanted dog is the more ethical choice for ownership.

However, the fact remains that feeding that dog the body parts of other animals to sustain its existence is unethical. Again, how can it be ethical to put numerous animals through suffering and murder to support the life of one other animal? The answer to that question is because you have a loving bond with the dog and no affinity to the animals it eats. You don't see the suffering of the farmed animals, so it is easy to ignore.

At this point one might say that rescuing a dog from a shelter and feeding the dog a plant-based kibble is all entirely ethical. It would be difficult to disagree. However, one potential problem with rescue dogs, older ones in particular, is that they have a dietary history and may not adapt well to a change of diet. Some rescue dogs have existing conditions and a veterinarian may not advise such a drastic change in diet.

Vegan dog ownership shouldn't be considered on an individual basis but rather on the ethics of the industry overall. As a vegan, doesn’t owning a dog support animal exploitation? Feeding dogs the flesh of other animals most certainly is.

The science is very clear that plant-based dog food is highly beneficial for dogs and the large majority of dogs thrive on this diet. This largely negates any excuse for feeding a dog a meat-based diet.

Scientists from the University of Guelph found that dogs on plant-based diets had a mean lifespan of 14.1 years, compared to a mean 12.6 years for those on meat-based diets (3).

Lastly, one must ask the question: Is it ethical to domesticate animals that must rely on humans for their care and well-being? Surely this is the pre-cursor to exploitation and suffering? Or, is it possible to be a responsible dog owner and respect the autonomy and dignity of dogs, while also reducing animal exploitation and cruelty?

What do you think?