You are here: Home / Morality / Meat, Money & Antibiotics – How the Food Chain is Endangered for Profit 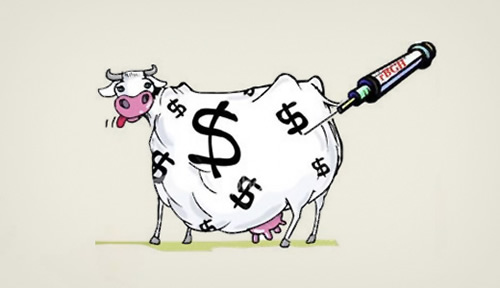 Ah, a day on the farm. Corn-fed cows a-mooing, chickens in the pen, a summer breeze rippling through the corn fields. Idyllic, no?

Well, no. That depends on your position in the food chain. The reality is that cows being corn fed is not a good thing for the cows, or the human beings that eat them. The cows, that seem to be happily lowing in the fields might just be returning to a shed where a thousand pound animal has just thirty feet of space, and that’s in lovable old Canada. The chickens fare even worse. But, I’m sure you are quite aware of the downside of big agriculture. You’re reading a website called Vegan Motivation, after all.

The problem, we're looking at today, has its roots in our cultural demand for meat in the west, and the steps our agriculture industry has taken to meet our demand.

As the demand for meat rose with the recovery of the economy after World War II, farmers discovered that animals fed with antibiotics grew to slaughtering weight faster and on less feed than those animals which were not.

How this worked was like this. A calf is weaned from the cow, and usually goes onto the standard diet of roughages- grass, hay, and some corn in the winter. Grains like corn are much higher in energy content than roughage, so a cow needs less of it to fuel growth and activity. So, corn was used in the cold months to supplement the cow diet, and as a fattener before the animal is sold to market.

So far, so good, except for the cow. Unfortunately, the good old days for the heifer are long gone.

As we demanded more and more meat for the table, and for a better price, the beef industry needed to produce more cows. This wasn’t a problem. The problem arose when it came to housing and feeding the animals we would consume; there simply wasn’t enough space to house them. If the cows had written history, it would tell the tale of a booming population, a housing crisis a decrease in living standards, and an increase in waistlines. The solution lay in increasing the grain intake.

Today, a beef cow eats between four and eight pounds of grains, including corn and GM soya, every day for two years until it is ready to slaughter.

A happy accident came from the initial set-back of the increased corn diet – cows are sensitive animals, and a high energy diet is not good for them. The cows became sick and stressed, so antibiotics were introduced to prevent the sickness spreading. So, it was discovered that by adding antibiotics to the grains the cows were fed on, cows would grow larger, faster, and sickness was reduced amongst the herd. Problem solved.

Or, alternately, problem magnified exponentially. Eighty percent of the antibiotics used in the United States today (over 13 million kilos per annum) is delivered into the food chain in animal feeds to prevent herd sickness and promote growth. This is a major problem when you consider the rise we have seen in antibiotic resistant bacteria affecting humans, like the MRSA bug. Vegan Motivation also finds itself uncomfortably allied on this issue with Dr. Joe Mercola of the Weston A Price Foundation, who you may remember as perpetrators of misinformation about soy. It just goes to show, the enemy of my enemy is my friend.

My apologies for the long preamble to this article, but I feel it is important to understand how and why meat is so dependent on antibiotics. The short version is as follows; our societal demand for meat is too high to be met by organic or free range farming. Period.

Just over two years ago, the results of a survey were brought to the attention of the US Congress highlighting the profligate use of antibiotics in food, broken down by retailer. Nothing has been done in response to preserve the health of US citizens. We’re not suggesting for a moment that regulation of antibiotics in the meat industry is any easy job- and I’m not for a moment levelling the finger at ranchers and farmers. The problem is systemic. There is a great article here that details the issues faced by independent cattle ranchers in the US, whose plight is perpetuated at the behest of Big Meat.

A rancher is now so heavily subsidised that overproduction becomes a necessity, which means larger herds, more risk of disease due to overpopulation and therefore more demand for antibiotics to ensure a healthy herd. The BSE crisis in the UK, while not antibiotic related shows the very real cost to farmers of an outbreak of disease. They are, with good reason, paranoid about losing even a handful of cattle when the survival of their businesses is on the line.

The third corner of the nightmare triangle that has led the meat industry to jeopardise its customers is the same as the crisis that affects our environment and banking systems. Lobby groups. With enough money, it is possible to force the hand of the most powerful governments on Earth, especially when they attempt to regulate problems that directly affect the welfare of human beings instead of serving profit.

In 1995, the US Department of Agriculture attempted to introduce testing for salmonella poisoning. Republican James Walsh, who received tens of thousands of dollars from the meat industry in campaign donations, introduced an amendment to the bill to stymie the process in red tape. Fortunately, for the citizens of the US, the matter became public, and there was a strong response from consumers and the press, forcing a compromise that led to the bill passing.

Nevertheless, the meat industry fought back in the Supreme Court a few years later, severely restricting the scope of the bill and allowing the continued shortfall in regulatory standards. Whenever there is legislation that would force businesses to make less money in favour of consumer welfare, it is certain that it will be fought, backed by millions of dollars that are either subsidised from government taxation or from the very industry that puts our health at risk.

We pay money to eat food that puts us at risk of illness and death, and then Big Meat uses that money to defend their right to maintain that risk instead of mitigating it; and this is not just a US problem, but global.

In complicity with the meat industry, hand in hand in the profiteering, is Big Pharma. Whether it is research into Ebola and AIDS, or the ubiquity of antibiotics in the food chain, there is a profit line to be maintained. A healthy population is bad for business. There’s no money to be made from people not smoking, not eating meat and living healthily.

When you look at the vast industry that faces us as consumers, it can feel daunting. Whether it is energy, health, diet, the military industrial complex or the environment, there are huge business interests that, for the sake of money, will frack the earth, suppress technology, innovation and information, compromise the health of citizens, encourage warmongering and hinder legislation to curb emissions and pollution.

So, we might as well throw our hands up and be done, right? They win. I don’t hold with that line of thinking. I spoke to Reiner Braun, a prominent member of the Peace Movement in Germany, at the anti-NATO protest in Cardiff, UK, in the summer of 2014. He told me something that applies to ethical living just as much as it applies to the campaign against militarism. “In any revolution, there are three stages. First there is ideological education, the spreading of the idea and real democracy, persuading people that you are right. Second, there is the process of non-violent resistance and mass protest, and third is confrontation with the power structure.”

It might seem a shade out there to advocate revolution over food, but there must be some systemic change to our model to safeguard our health and the environment. It won’t come from legislation under the current paradigm; it can only come from people like you and me, finding out information for ourselves and educating others. The way I see it, if our food is poisoned against us, our government is in the pocket of the poisoner, and the perpetrators focus solely on profit, who then is left to look after our health but ourselves? In the context of food, going vegan is itself a revolutionary act.

“I applaud my friends for eating local plant-based foods but have to argue to them that the continued consumption of animal products is more harmful than they know.

The reduction in ‘food miles’ from consuming local animal products is overshadowed by the energy and resources necessary for their production and refrigeration. And while the more affluent among us can afford the more expensive grass-fed products and thus avoid eating domesticated animals plied with pesticides, antibiotics and hormones, the vast majority of people will continue to eat the cheapest fare that the Animal Industrial Complex can produce.

And even if the world were more equitable, moral and environmental issues aside, there simply is not enough land or water to “free range” the tens of billions of domesticated animals necessary to meet the growing, socially engineered demand.” –David Nibert, Wittenberg University.